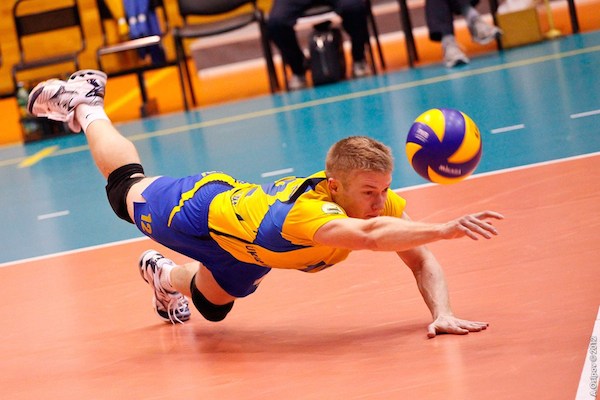 Does a team have to hit the ball three times in volleyball? Is that a rule or a custom? What happens if you hit it right back to the other team when you get it?

If you’ve ever played or watched volleyball, you’ve probably heard the phrase, “bump, set, spike.” That three word phrase describes the most common way that a volleyball team deals with a ball hit to their side of the court. The ball usually comes over the net from the other team moving pretty fast, and it’s often not possible for the defensive team to reach it until it’s close to the ground. This necessitates an underhand hit, usually done with two hands folded into each other, called a bump. The purpose of the bump is to prevent the ball from hitting the ground and to get the ball moving back up into the air, where it can shed some of its speed and be easier for the next person to handle. The next person closest to the ball runs under its arc and is ready to take it when it reaches close to head height. Their job is to take the now much more controllable ball and set up one of their teammates in a position where they can really attack the other team with the next hit. This gentle, tactical move is called a set and it’s done with two hands pointed towards each other with the fingers slightly loose. A set sends the ball easily back into the air, right into a spot that’s above the height of the net and usually quite close to it. From there, a leaping teammate can spike the ball, hitting it as hard as they can with the heel of their hand, aiming for a spot on the other team’s side of the court where they think it will be able to find the ground regardless of the opposing team’s defensive efforts. This pattern, bump, set, spike continues unabated until one team is unable to save the other team’s spike from hitting the ground or the ball goes out of bounds. Bump, set, spike – three hits on each side of the court – is the common rhythm of volleyball but it is not a rule.

There’s no rule in volleyball that requires a team to hit the ball three times before sending the ball back over the net to the other team. There is a rule that dictates that a team may not hit the ball more than three times before the ball travels back over the net or touches a player from the opposite team. Three is a maximum number of hits, not a required number. A team may choose at any point to hit a ball coming onto their side of the court right back to the other team without pause. So, why is three such a dominant number? It comes down to tactics. Each time the ball comes onto one team’s side of the court is a threat and an opportunity. It’s a threat because if the ball drops to the floor, the other team gets a point. It’s an opportunity because if the team can bring the ball under control and set up a strong shot, they have a chance to score a point if they can overpower or fake out the opposing team’s defense. Using the full three hits offers the best odds for a team to be able to create a winning hit for their team. It usually takes a good bump on the first hit just to prevent the other team from scoring. It’s hard to set up a good spike straight from a bump, so a set is usually the next move. Just like that, it’s the third hit! Once in a while, a savvy volleyball player will take advantage of this three hit rhythm by doing a quick spike on the second hit, when the other team is expecting a set. This rare move can catch a defensive team unprepared and score an easy point, but it’s the exception that proves the rule.

Next time you watch volleyball, see if you can identify a time when it would have been better for one team to hit the ball over the net in fewer than three hits!