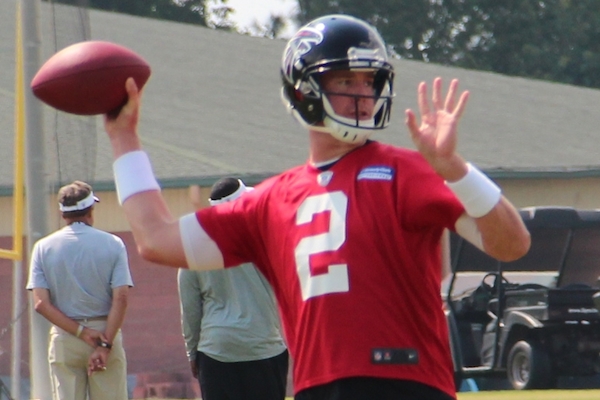 National Football League (NFL) previews abound at this time of year. We’re close to the start of the 2015 NFL season and basically everyone in the sports world is in a tizzy, anticipating another great season of the country’s favorite sport. Whether you’re a beginning NFL fan, the family member, friend or partner of an NFL fan, or simply someone who doesn’t follow the league during the offseason, our team previews should get you ready for the season to begin.

If you’re curious about the history and culture surrounding the team, and not just the plot and characters of this edition of the team, read What’s special about the Atlanta Falcons?

How are Atlanta Falcons fans feeling heading into the 2015 NFL season?

Confident but trying not to jinx anything

When are the Atlanta Falcons on national television?

Use this to know when you should host a party with locally (or favorite team-ily) themed food!

When is the Atlanta Falcons bye week?

Use this to know when to plan that camping trip you’ve been wanting to go on.

What was the Atlanta Falcons record last season, in 2014?

Who are the Atlanta Falcons most important departed characters?

Head coach of the Falcons since 2008, Mike Smith was fired after last year’s disappointing 6-10 record. The Falcons under Smith went to the playoffs four times in his first five years — a very impressive feat. Since the NFL playoffs, with their single elimination games, are basically a crap-shoot, it’s not hard to feel sympathy for Smith. How differently would he be regarded if the Falcons had lucked into even a single Super Bowl appearance? As it is, he’s remembered (for now) as a relatively bland manager.

Who are the Atlanta Falcons most important new characters?

Smith is replaced by a man who no one would call bland. Dan Quinn, the new head coach of the Falcons, was defensive coordinator for the brash and dominating defense of the Seattle Seahawks for the past two years. In both of those years, the Seahawks advanced to the Super Bowl, thanks in large part to the strength of their defense. A former defensive end and record-setting hammer thrower, Quinn is a dominating presence. Quinn gets a new toy to play with in linebacker Vic Beasley, who the team selected eighth overall in this year’s draft.

Who are the Atlanta Falcons most important characters?

When a team hires a defensive coach as their head coach, they’re making a statement about which side of the ball they feel needs more work. Quarterback Matt Ryan is a big reason why the powers that be in Atlanta felt they could let the offense fend for itself for a little while. Ryan’s public persona is bland but his play is anything but that. For the Falcons to succeed this year, Ryan will have to continue to improve. At age 30, he’s closing in on his peak years as a quarterback.

What is the most pivotal pivot point for the 2015 Atlanta Falcons?

Last year’s defense was one of the very worst in the league. If the new characters on defense can drag the rest of their defensive teammates from terrible to even just bad, the team has a good chance at success.

How will the 2015 Atlanta Falcons fare?

The defense will improve from terrible to bad, the offense will be even better than it has been and the Falcons will win their division.