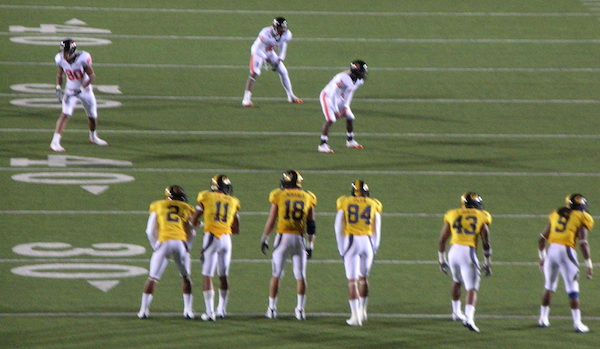 Onside kicks are chaotic, happen rarely, and are often quite confusing, even to football fans. The first step in understanding and making sense out of the onside kick is to categorize it as a tactic, not a special type of play that has special rules. The onside kick is a tactical option during any kickoff play for the team kicking off. A team that chooses to execute an onside kick is hoping to retain (or regain) possession of the ball instead of giving it to the other team as is normal on a kickoff.

An onside kick is a tactic that tries to manipulate the situation of the kickoff so that the team kicking the ball ends up with possession of the ball. The most common approach to an onside kick is for the kicker to try to kick the ball to one side of the field so that it’s about eight feet above the ground and ten to twelve yards down the field from where it was kicked at exactly the time that six players on the kicking team who are sprinting up the field reach that spot. If all that happens as planned, the sprinting players on the kicking team can leap into the air and try to catch the ball or smash into the receiving team’s players and hope to cause enough fear, uncertainty, and doubt that one of them tries to catch the ball but isn’t able to secure it. This can be a spectacularly violent play with players throwing themselves at each other and at the ball. A more subtle approach is to kick the ball on the ground either at a receiving player with the hope that it might bounce off of them and be free for the kicking team to corral or at an empty spot between receiving players with the hope that a quick player on the kicking team can reach that spot before the receiving team responds.

The kicking team only successfully regained the ball on only 36% of attempts in the NFL in 2014. The reason why we don’t see them happen more frequently is that when the kicking team doesn’t get the ball back, the receiving team gets to start their offensive possession wherever they got the ball, which, since onside kicks generally only travel about 10 to 15 yards, is quite advantageous to the receiving team. A 36% chance of getting the ball back simply isn’t worth a 64% chance of giving the other team the ball on your side of the field. At least, an onside kick isn’t worth it most of the time. At the end of games, when one team is trailing, it could be quite worth it, in fact, it’s often the only chance a trailing team has. The reason why the logic tilts so much is that once a team has possession of the ball, it is able to run time off the game clock by running plays (or kneeling, which is kind of a simulation of a play) that keep the clock moving. It’s often the case that a trailing team knows that it will lose if the leading team gets possession of the ball. In this case, since it doesn’t matter where the other team gets the ball, trying an onside kick becomes an obvious choice.

The downside of attempting to retain the ball on a kickoff in that situation is that the other team knows what’s coming. The receiving team reacts by putting a “hands team” of players out there, all of whom practice receiving onside kicks as a unit. The rate of success for onside kicks when the other team knows its coming is less than 20%. The overall success rate of 36% includes times when a team decides to try an onside kick in a non-obvious situation. These surprise onside kicks – executed at a time when the other team is not expecting it and does not have their hands team on the field – are successful 60% of the time! It’s a high-risk, high-reward strategy that’s most often used by teams that feel they are out-matched and need to find some edge to get ahead.