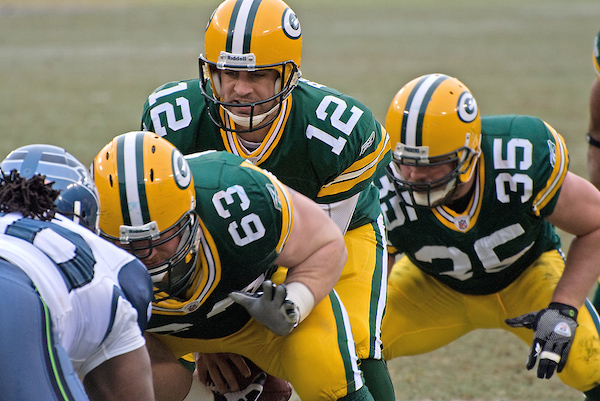 The Green Bay Packers won their game last night against the Kansas City Chiefs 38 to 28. A 10 point victory is not considered a blow-out in the NFL but this game in particular was more conclusive than most 10 point wins. It was the way that the Packers beat the Chiefs that was so impressive. It looked like they were playing football an a whole other level than the Chiefs were — almost like they were playing a different game. They were. Packers quarterback Aaron Rodgers is playing at such a high level that it sometimes seems like he’s playing at a different level than everyone else. While everyone else is playing football, he’s playing meta-football. There were three plays, when the Packers were on offense, that stuck out as examples of this.

One thing is a series of posts that examine a small part of a sporting event to explain and explore its meaning in a way that’s accessible to sports fans and laypeople alike.

Two of the three meta-plays from last night were offensive plays that resulted in penalties called on the Chiefs for having too many men on the field when the ball was snapped. When the offense snaps the ball, signaling the start of that play, each team is only allowed to have 11 players on the field. This is rarely a problem. Football players are pretty good at counting! The fact that it happened twice yesterday isn’t due to any deficiency on the part of the Chiefs but rather an intentional act of trickery by Rodgers. When the defense makes a substitution, one player runs onto the field while another player runs off to their team’s sideline. This isn’t an inconsiderable distance, especially when the play is starting on the far side of the field from where the defensive team’s bench is. Defensive players have been doing this for most of their lives though, and they have a good internal clock which tells them how much time they have to exit the field before the snap. What they’re not accounting for is Rodgers’ meta game. Rodgers notices when an opposing defensive player, particularly a bigger, slower lineman is substituting, and then rushes his team to the line and tries to snap the ball immediately. He speeds up the offensive process so that he can start the play before that defensive player makes it off the field.

This benefits his team in three ways: one straightforward, one sneaky, and one demoralizing. The straightforward advantage is that the refs will call a penalty on the defensive team, in this case the Chiefs. The penalty moves the ball five yards down the field, after which the Packers get to start their offensive play again. The penalty doesn’t automatically give the Packers a first down, but if moving those five yards would have otherwise, the penalty yardage will. The sneaky benefit is that this foul call doesn’t take effect immediately. The play will continue and at the end of it, the Packers get to choose whether they want the five yard penalty or the result of the play. Because Rodgers knows he can retroactively make that choice, he’s going to use the “free play” to try to advance the ball as far as possible in one play. It gives him the freedom to take a risk he might not ordinarily take, like throwing the ball into the end zone even if his targeted receiver is well covered, because he knows that if the other team does something great, like intercept the ball, the Packers can just choose to accept the penalty and the other team’s great play will be wiped away. (For advanced readers, note that 12 men on the field IS a reviewable call, so even if the refs miss it, the Packers will still have a good chance of backing the play out if they need to.) The third and lasting benefit is to frustrate and demoralize the opposing team. It’s hard enough to play against a team that’s as great as the Packers but it’s even harder to play against a quarterback who is masterfully manipulating the rules of football against you.

The other meta play from last night’s game is a similar trick that Rodgers plays. In this one, he tricks the opposing defense to come across the line of scrimmage before the center snaps the ball. Called “drawing the other team offside,” this is a common tactic that quarterbacks try but few are as good at it as Rodgers is. Check out the video of a touchdown that the Packers scored on the “free play” resulting from Rodgers’ tricky meta-game. The player to watch is number 91 in white and red. His name is Tamba Hali and a he’s one of the most fearsome pass rushers in the league. When he jumps offside, he not only gives the Packers a free play, with which Rodgers is liberated to throw the ball into the end-zone with no possible negative consequences, but, when he realizes he’s been caught offside and bamboozled, he stops briefly. This natural human reaction adds to the benefit of the play to the Packers. Not only do they have a consequence-free play but they get to run it with a half-ineffective Tamba Hali!

Thanks for reading. I’ll keep my eye out for more interesting plays to write about.
Ezra Fischer