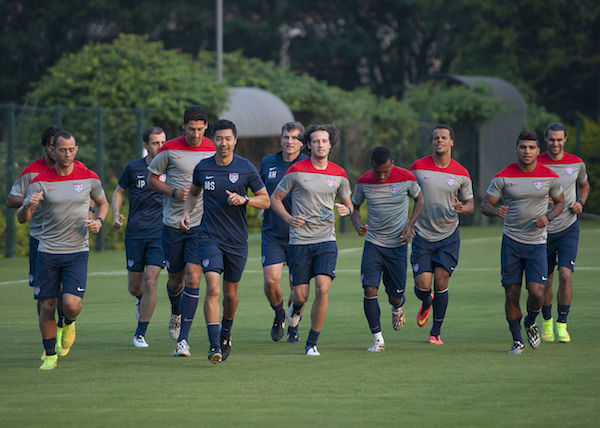 When the United States Men’s National Soccer Team (USMNT) plays against Mexico tonight, it will be one of the biggest non-World Cup games in memory. I’ll be watching, starting at 9:30 p.m. on Fox Sports 1, and I encourage you to do the same. Of course, just saying it’s an important game shouldn’t be enough to get you interested, so I’m going to try to explain why it’s so big in this post.

The CONCACAF Gold Cup is the biggest men’s soccer tournament in North America, Central America, and the Caribbean. In it, teams from all over those regions compete every two years to determine which country is the best. It’s an important tournament for world rankings but even more so for continental bragging rights. In the 26 years (13 tournaments) since the Gold Cup began, Mexico or the United States has won the cup all but once. Mexico has won it seven times, the United States five times, and Canada surprised the world and won it in 2000. Must have been some kind of Y2K bug. In the two most recent tournaments, the United States won once (in 2013) and Mexico won once (this year). This is pertinent, because that split over the past two tournaments is why Mexico and the United States are playing tonight.

The Confederations Cup is another international soccer tournament. This one happens every four years. It’s a small tournament, only eight teams, and highly exclusive. The only way to get an invitation is to win one of FIFA’s regional championships, like the CONCACAF Gold Cup. There are six of these tournaments throughout the world. The other two teams invited are the current World Cup champions and the next country to host the World Cup. The tournament is offset from the World Cup by a year (the next World Cup is in 2018, the next Confederations Cup is in 2017) and is hosted by the host of that World Cup. It’s almost like a dress rehearsal for the World Cup. Playing in the Confederations Cup is important to countries like the United States and Mexico because it offers a rare chance to play in a World Cup-like atmosphere against the best teams in the world without quite the same unbearable pressure that the actual World Cup brings.

If those stakes weren’t enough on their own to make this a big game, there’s also a long-held and simmering once again rivalry between Mexico and the United States in men’s soccer. The general arc of the rivalry is this: Mexico was the undisputed power in CONCACAF forever, until around the mid 1990s when the United States started to challenge them a bit. Then, in the 2000s, the United States seemed to surpass Mexico, which was the cause of much gloating on the U.S. side and much angst on the Mexican side. Now things have settled in to a murky stalemate. Neither team is as good as they once were and both sides have a strange mixture of existential pessimism and swagger. Leading up to this game, the Mexican TV station Azteca ran a frankly hysterical advertisement with clips of Donald Trump, whose idiotic comments about Mexico are well known, interspersed with pictures of Mexican soccer players doing awesome stuff. This was pretty great — it stirred the rivalry up while also bringing soccer fans on both sides together, since even the most partisan U.S. fan should be able to see the humor and irony in the ad. Then, just a few days ago, Fox Sports 1, which is televising the match, ran their own ad featuring Trump. This pro-U.S. ad comes across as jingoistic and arrogant and has been widely criticized. It’s unlikely that Fox’s misfire will mean much to the players but it’s equally unlikely that they needed any more motivation to bring the simmering rivalry to a roiling boil tonight.

If you want to learn more about the USA vs. Mexico men’s soccer rivalry, I recommend these two oral histories from ESPN and MLS Soccer.