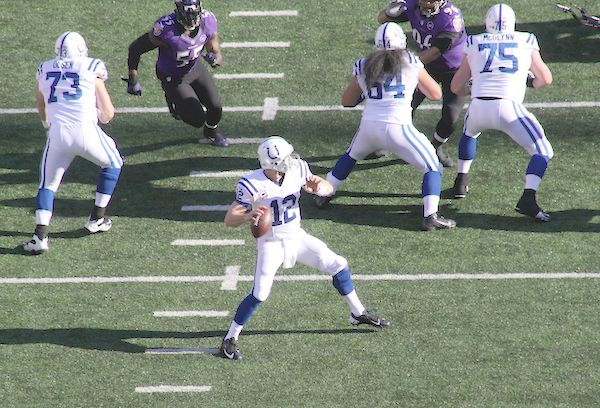 What is a back shoulder pass in football? Whose shoulder does the phrase refer to?

A back shoulder pass in football is a type of throw where the quarterback aims the ball to intersect with the path of a receiver just behind him as he runs down the field. It is an offensive tactic that takes advantage of a fundamental defensive rule by breaking a fundamental offensive rule.

The second thing you’re taught when you’re taught to pass a football (the first is: look where you want the ball to go, not at the ball! Thanks Dad…) is to lead the person catching the ball. If the receiver is running from your left to your right, you should throw the ball to a spot farther right. This way, assuming the receiver keeps running at a constant speed, by the time the ball gets to them, it will be right in front of their path, in a spot that’s easy for them to catch while they continue running.

The first thing you’re taught when you’re taught to play defense in football is to keep your body between the player you’re covering and your end zone. That way, even if they catch the ball, you should be able to tackle them (or two-hand touch them or grab their flag) before they can run into the end zone and score a touchdown.

These two fundamental principles are not in conflict when a player runs horizontally on the field to catch a pass from their quarterback or if they run down the field, turn around, and come back toward the quarterback. In those scenarios, the quarterback’s attempt to lead their receiver will not risk putting the ball closer to where the defender is (between the receiver and the end zone) than where the receiver is. But, when a receiver runs down the field, away from their quarterback, then leading him inevitably leaves the ball on the side of the receiver where the defender ought to be. Sometimes, a wide receiver is fast enough to negate this issue by running past their defender. This puts them between a well lead pass and the defender and often results in a long gain or touchdown. Most of the time though, the defender is savvy, fast, and physical enough to prevent this approach. So, a clever team will deploy the back shoulder pass. Here’s how it works:

One disadvantage of a back shoulder pass is that it’s harder to catch. I tried to trap a pass in a pickup soccer game that was a little behind me the other day and I basically just fell directly into a pile of mud. It’s hard to swivel your upper body while running full speed and successfully catch a ball. In order to do it, a wide receiver will often have to slow down or even dive backwards, both of which make it harder for them to gain yardage after the catch, another disadvantage. The advantage is that it is safer than leading a wide receiver running down the field. Although back shoulder passes require great anticipation from the quarterback and coordination between him and his receivers to work, when they go wrong, they don’t tend to go very, very wrong. No matter what, the intended receiver’s body should still be between the ball and the defender, making it harder for them to intercept the ball or knock it down.

By breaking the fundamental rule we all learn when we first throw a football, the back shoulder pass exploits another fundamental rule – that a defender should keep his body between the receiver he’s guarding and the end zone.