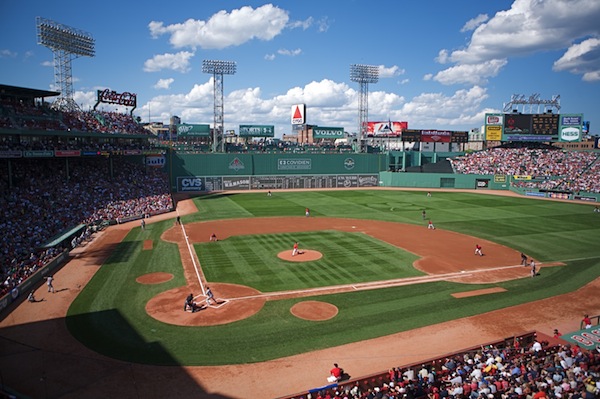 What is a shift in baseball?

If you’ve watched a baseball game on TV lately, there’s a good chance you looked up at your television screen at some point and were surprised by the location of the players on the fielding team. Perhaps the short stop was on the first base side of second base instead of in his normal position on the third base side. Or the first and third basemen were on the home plate side of their bases and creeping in as the pitcher readied to pitch. What you were seeing was a shift – a tactic whereby the fielding team adjusts its positioning before the ball is put in play. A team may choose to shift its outfield, its infield, or both for situational or personnel reasons. We’ll run through a few examples of each scenario in this post.

The shift is a compelling element of baseball because it is simultaneously so obvious and so revolutionary. If you’ve ever played in the outfield of a baseball or softball game, you probably automatically shifted based on who was at bat; that dude with biceps the size of watermelons who hit the ball way past you last time is up to bat? You move back. That’s an example of a shift based on personnel. You see who is up to bat and adjust based on what you think they might do. In the example we gave, it doesn’t feel revolutionary. The personnel shifts you see in Major League Baseball (MLB) games today are the product of a similar type of analysis, just formalized and backed by big amounts of data. By the time a player has been in the league for three years, they will have played in close to 450 games and been up to bat over 1,250 times. This gives opposing teams a lot of information about where they usually hit the ball. Virtually every player has patterns that will reveal themselves over time and with study. A player who has a strong tendency to hit the ball in one direction or location is more vulnerable to a defensive shift.

Other times, it’s not the player who is up to bat but the situation that dictates a defensive shift. For example, if the batting team is down a run, has a player on first base, and is likely to try to bunt the ball to advance the runner to second, the first and third basemen may move toward home plate so that they are prepared to field the bunt they believe is coming. If it’s the bottom of the ninth inning, the batting team has a player on third base, and the game is tied, then the fielding team knows that they will lose if they allow that player to reach home. If the batter hits a long fly ball to the back of the outfield, the base runner will stay on third base until the ball is caught but then have plenty of time to run home safely before any throw could reach home plate. In this case, the fielding team knows for sure that any ball hit to the back of the outfield will result in them losing. So why even have outfielders back there? Isn’t it better to have them move in, so a ground ball hit through the infield may be able to be fielded quickly enough to prevent the runner from scoring? It is! The outfielders moving in in cases like that are another classic scenario that calls for a situational shift.

Defensive shifts have become much more common and more extreme in recent years. As of this year, they have doubled in frequency every year since 2011. It’s now quite regular for teams to shift all or almost all of their defensive players to one side but it still looks weird. One wonders how professional baseball players, people who are paid millions of dollars to be good at hitting a ball, cannot simply hit the ball in an unexpected direction. Apparently, it’s harder than it looks! Shifts are all part of the greater statistical revolution in baseball. The gloriously large and discreet data that baseball creates have offered numerous opportunities for teams to identify exactly what each opposing player and team does best… and do everything in their power to take that away from their opponents. Shifts are an integral part of the tactical game of cat and mouse that makes baseball a compelling sport to watch.