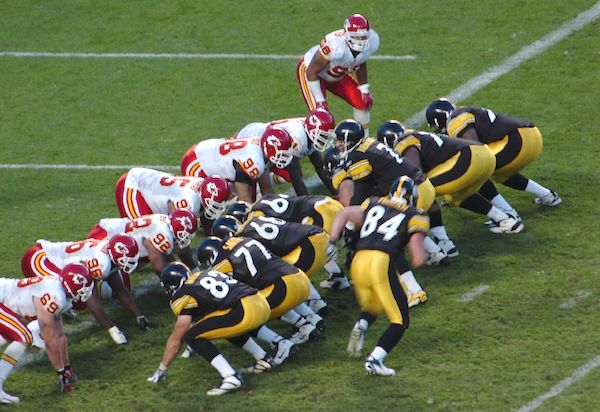 I’m confused over what constitutes offensive illegal motion in football. Rule 7 – Section 7 states, “No player is to be moving toward the line of scrimmage when the ball is snapped.” Does this mean there’s a brief wait period before a backfield player can advance after the snap?

Look forward to your answer,
Dennis

From your reference to Rule 7 – Section 7 in your question, I’m going to assume that you’re interested primarily in the National Football League, not any other type of football. Rule 7 – Section 7 in the NFL rulebook corresponds to illegal motion, a very specific violation of a general rule. In this post, I’ll explain the general rule, then write about the specific violation called illegal motion, and quickly touch on the other common penalties that are similar to illegal motion. At the end, we’ll return to your question about whether a backfield player must wait briefly before advancing after the snap.

The general rule which underpins the illegal motion penalty is that offensive players should be still when the ball is snapped. Although this sounds mundane, it’s actually one of the primary things which separate football from the rest of the popular sports. As opposed to a fluid, constantly shifting game like basketball or soccer, football is a series of set plays, almost like moves in a turn-based board game. The game stops, the teams set up, they go like demons for a short period, and then the pattern repeats. All the stopping and starting can make football seem boring to new fans and lead to the common criticism that football games only have 11 minutes of action but it’s actually the key to football being the most tactically complex and suspenseful sport. When I think about how I watch a football game, the moment between when an offensive team has set up to begin a play and when they snap the ball is the moment when my brain is most active. I’m trying to figure out what’s going to happen – is the offensive team going to run or pass? Will they be successful? Who is going to be involved in the play. Having the offense pause before the play starts facilitates more than just fan interest, it also gives the defense a chance to adjust their formation and plan to match the offense’s. This is essential to keep things somewhat balanced between offense and defense.

Motion is a technical term in football that provides one exception to the rule against the movement of offensive players when the ball is snapped. One player on the offensive team may be moving when the ball is snapped as long as that player is not moving toward the line of scrimmage and he is not a member of the offensive line. You see this somewhat commonly with wide receivers who move from one side of the formation to the other or running backs who move from one side of the quarterback to the other. Illegal motion is what happens when a team attempts motion and fails for some procedural reason. The two main types of failure are the player in motion mistakenly moves toward the line of scrimmage instead of just sideways and the player in motion being ineligible to be in motion because he was originally lined up on the line of scrimmage like an offensive lineman. In all cases of illegal motion, the penalty is five yards.

To return finally to your question about whether the illegal motion rule means that a backfield player like a running back or quarterback has to momentarily wait after the ball is snapped before moving, it does not. Illegal motion only applies to players who were moving before the ball was snapped. As long as they are eligible to move and moving sideways or backwards, they are allowed to continue their motion through the snapping of the ball. All the other players, who were still before the snap, are allowed to start moving in any direction as soon as the ball is snapped.

Thanks so much for reading and keep the questions coming,
Ezra Fischer