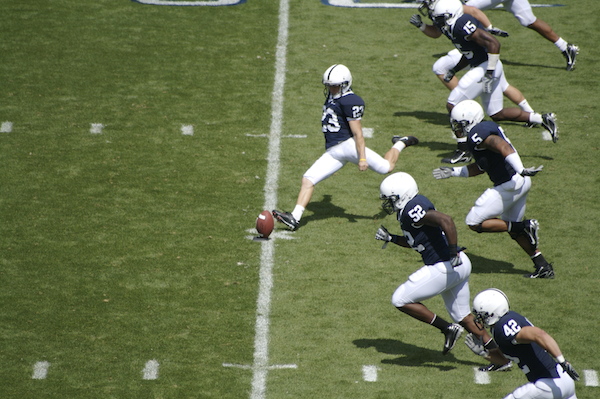 I was watching football this weekend and I thought I heard one of the announcers say something about a “squid kick.” Turns out, it was a “squib,” not squid. What is a squib kick in football?

Oh, I really wish there was something in football called a squid kick! What would the squid kick be? Maybe one that utilized a formation with a few people close together and then a bunch of people trailing behind them? Alas, what you did hear was squib kick. A squib kick is kickoff play in which the kicking team intentionally kicks the ball close to the ground and about half as far as they normally would on a kickoff.

The primary reason for using a squib kick is that it limits the likely range of outcomes from the play. On a normal kickoff, the returning team will get the ball close to or in their own end-zone. If the player who gets the ball tries to return the kick, he usually has about five to ten yards of space before the players on the kicking team who are “covering” the kick are able to reach him. This gives him some time to pick up speed, choose a direction to run in, and have his teammates set up to block for him. If everything goes well, he’s able to weave his way between all the players trying to tackle him and sprint down the field for a touchdown. More often, he gets brought down between the 15 and 25 yard line. Sometimes, trying to return a kickoff is a terrible idea and the return man gets tackled right near his own end zone. The range of outcomes from a normal kickoff is quite big. A squib kick shrinks this range. The ball doesn’t go so far down the field, and instead of flying through the air in a nice, easy to catch arc, it bounces around of the ground. This means that by the time someone on the receiving team corrals the ball, they’ve got little to no time and space to try to return it. They usually get tackled almost as soon as they touch the ball. As a bonus, since the best returners are set up at the back of the receiving team’s formation, the player who catches a squib kick is usually bigger, slower, and less used to returning kicks. The downside is that the ball doesn’t go as far, so the receiving team cannot be tackled close to their own goal-line. But they’re also very unlikely to return the kick for a touchdown.

The word squib comes from the world of explosives. In explosive terms, a squib is a device that resembles dynamite but packs a much smaller punch. It’s been used for controlled explosions in mining, film stunts, and even devices like automobile air bags. The difference between a squib and a dud is that a squib’s meekness is intentional. You can understand how this meaning came over to football. The squib kick is not as strong and doesn’t travel as far as a regular kickoff.

There are two main situations when teams will use a squib kick. The first is situational – if the kicking team is winning and would only really be threatened by a return touchdown, they may choose to use the squib in order to reduce the likelihood of that happening. The second is based on personnel – if the returning team has a supremely good kick returner, the risk of having the return any kick for a touchdown may not be worth the opportunity to trap them close to their own end zone. In this case, a team may squib every kickoff during a game.