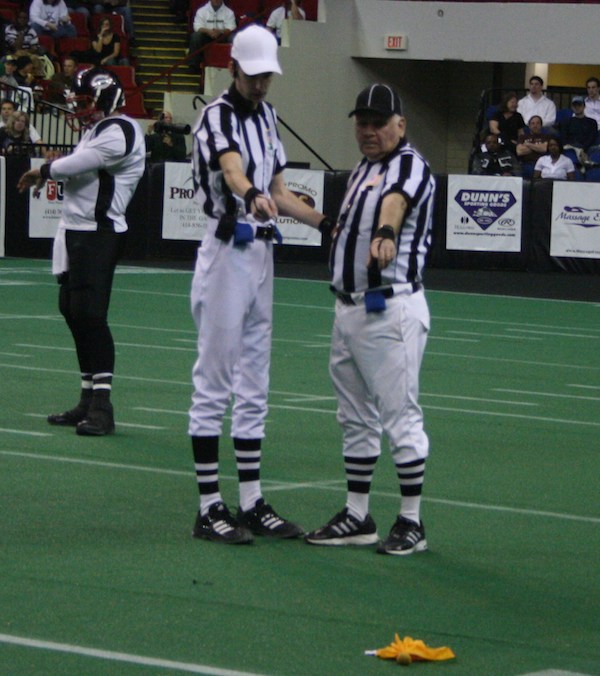 I was watching the football game between the Detroit Lions and Green Bay Packers last night and noticed that a ref had thrown his hat on the field. I know what i means when refs throw yellow flags, but why does an NFL ref throw his hat on the field?

Being an NFL ref is not a full-time job but it can be fun — for one thing, they do get to throw a bunch of different objects! As you mentioned, the most common thing for a ref to throw is a yellow flag. This symbolizes a foul that he has seen and intends to call. At times, you may also see refs throw a small, blue bean bag onto the field. No, it’s not the 1990s again, the ref isn’t about to sit down on the bean bag! The bean bag is thrown to the spot where a change of possession happened, because a penalty called after that time will often refer to that spot – i.e. five yards from the spot of the interception, fumble recovery, or kick return. Throwing things is fun, as is explaining why NFL refs throw things, but you didn’t ask about flags or bean bags, you asked about hats. Let’s get down to the hat.

The simplest reason for a ref to throw her hat is because she’s already thrown her flag! That’s right. Instead of carrying a backup flag, if a ref sees a second penalty to call after throwing his flag for the first one, his only recourse is to throw his hat. This is simply a brilliant move. Not only is throwing a hat a fun thing to do, but it’s also what cartoonishly angry people do in old comedies or cartoons to show their anger. I love thinking about the original ref who believed so firmly in law and order that he got super angry at seeing a second (a second!!) foul on the same play that he threw his hat in anger… and it became the standard for dealing with that situation. You might ask what happens if a ref sees a third foul. I don’t know, but Jerry Markbreit and Alan Steinberg’s book Last Call: Memoirs of an NFL Referee suggests an amusingly scatalogical solution.

Seeing two fouls on one play does happen, but more frequently the cause for an NFL’s hat throwing is something different. Football players are expected to stay on the football field while play is going on. This is not normally a problem, except perhaps with very young children who are prone to wandering. Sometimes though, a player running down the sideline, especially someone on the offense who is trying to get in position to catch a pass, will step out-of-bounds inadvertently or in an attempt to get around a defender. When this happens, that player becomes ineligible to catch the ball. Just stepping out-of-bounds is not against the rules, so no flag should be thrown, but if the player who goes out-of-bounds catches the ball, then there’s a penalty. So, in order to help remember that the player has gone out-of-bounds, the ref watching him throws his hat to the ground and later, if the catch is made, throws his flag. The one exception to this rule is if the offensive player has been pushed out-of-bounds by a defender. In this case, he is allowed to catch the ball as soon as he re-establishes himself in bounds by touching the field with both feet or some part of his body other than his hands. No hat need be thrown in this situation.

What other sport requires their officials to throw so many things! Ah, football.