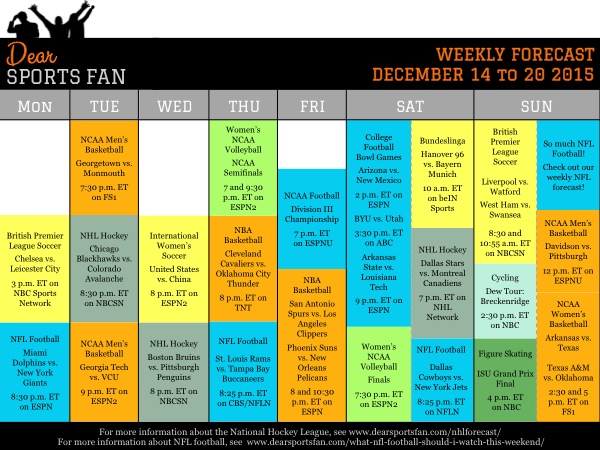 For detail on the all-popular, all-powerful NFL, which groups most of its games on Sunday afternoons, see our NFL Forecast. You can also get daily updates from our NHL forecast and NBA forecast.

Monday: The story of British soccer this season has been the precipitous fall of last year’s champion, Chelsea. After 15 games, they’re in 15th place out of 20 teams. That’s frankly absurd given how much more money Chelsea has to spend on players than the other teams around them in the standings. Today they’ll try to get back on track against Leicester City. Leicester has been the exact mirror image of Chelsea so far. After climbing out of last place at the end of last season, they’re a surprise second place so far this year. In the NFL, the Giants and Dolphins both still have hopes of making the playoffs but they won’t anymore (or at least not if they are rational) if they lose this game.

Wednesday: The U.S. Women’s National Soccer team continues its interminable victory tour tonight with a friendly against their once and future rival. China. The Pittsburgh Penguins will be interesting to watch as they take on the Boston Bruins less than a week after firing their coach.

Saturday: The college football bowl season begins with a full slate of games. The general quality of the games gets better over time, so the first day is usually nothing to write home about. In this case, some of the bowls at least feature geographic rivalries. The women’s NCAA volleyball championship is on ESPN2 and will be worth checking out. In hockey, two of the top teams this year, Montreal and Dallas, play one of only two games against each other this year. The NFL colonizes Saturdays with a moderately interesting game between the Dallas Cowboys and New York Jets.

Sunday: Even more now than ever, because of the impending real life playoffs and the current fantasy football playoffs, the NFL rules the day. If you’re looking for non-football sports to watch, you do have some excellent options. There are two watchable British soccer games in the morning, a trio of college basketball games, men’s and women’s in the afternoon and evening, and little bits of cycling and figure skating as a bonus!