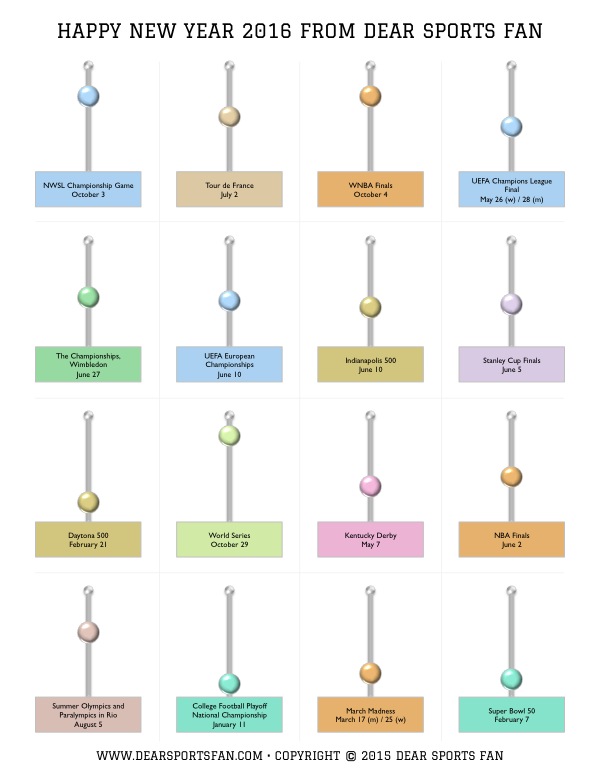 2015 was a wonderful year in sports and a great year for Dear Sports Fan! Thank you for being a part of this experiment with me. I feel lucky to have been able to share so much of what I was thinking about with you during the past year. Here are some of the highlights of the year. Read to the bottom for a special treat for 2016.

In February, right before the Super Bowl, I published a series of heartfelt and deeply researched articles on the topic of brain injuries in football… and also what the top ten dirtiest sounding football phrases actually mean. In March, the madness of the NCAA basketball tournaments inspired me to share four business lessons one can learn from the sport and also four ways to fill out a tournament bracket if that’s more your speed.

In May and June, I came down with a bad case of World Cup fever and wrote dozens of articles about the 2015 World Cup. My non-gendered profiles of each of the women on the U.S. Women’s National Team were popular, which I was proud of, even if some of the most common search terms for them was “is [insert player name, most frequently Megan Klingenberg] married?” I fleshed out Dear Sports Fan’s coverage of soccer in general and shaped the articles into three email courses which are still available today: Soccer 101, Soccer 201 – Positions and Logistics, and Soccer 202 – Culture. A personal high point was my trip to Montreal to watch the USA vs. Germany semifinal match.

After I moved to the Boston area in the spring, I decided to take Dear Sports Fan into the real world by starting a Meetup group. We’ve had a great time at our viewing parties, watching sports in an environment friendly to questions and welcoming to people who approach sports from all angles.

Throughout the year, I kept an eye out for moments when sports and the larger culture intersect. This has taken serious forms, like when shared my disgust with the drafting of Jameis Winston, and silly forms, like before the Kentucky Derby when I mined the world of musical theater for horse racing and betting tips, As always, the heart of the website has been a desire to make it easier for sports fans and non-fans to co-exist. With the NFL playoffs coming, it’s worth revisiting my thoughts on how a household can survive the football season without going crazy.

As one year comes to a close, another is just beginning. As a token of my appreciation for all the support I received during 2015, here is a New Year’s guide to the top 16 sporting events of 2016!