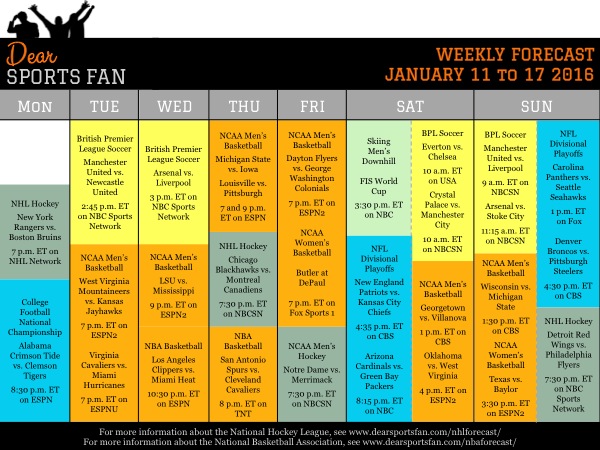 For detail on the all-popular, all-powerful NFL, which groups most of its games on Sunday afternoons, see our NFL Forecast. You can also get daily updates from our NHL forecast and NBA forecast.

Monday: The big ticket event of the day is the national championship game in college football. There’s a big portion of the sports watching population that’s more into college than professional football, and for them, this is a big day.

Tuesday: Soccer in the morning and basketball in the evening. It’s not a bad way to go, which is good, because if you wanted to, you could spend four days this week so occupied. If it’s a close game, the best of the day will be the basketball game between the number one ranked Kansas Jayhawks and the West Virginia Mountaineers.

Wednesday: Liverpool vs. Arsenal is a heck of a mid-week soccer game. If you can find a way to sneak out of work at 3 p.m., do so, you won’t be sorry. In the evening, you can take your choice of a college basketball game involving the likely number one pick in this year’s NBA draft and an NBA game featuring a bunch of players who were high picks themselves.

Thursday: If I had my pick of the games today, I think I’d watch the hockey game between the current dynasty in the NHL, the Chicago Blackhawks, and the most storied team in hockey history, the Montreal Canadians. There’s a not dissimilar game in the NBA as well, the dynastic San Antonio Spurs against the team with the consensus best player in the world, the Cleveland Cavaliers.

Saturday: The second weekend of the NFL playoffs is even more compelling than the first and in many ways, it’s better than the next two as well. The four best teams in the league this season face the winners of last weekend’s playoff games after having a week off. Don’t mess around this weekend, if you’re gonna watch sports, watch the football.