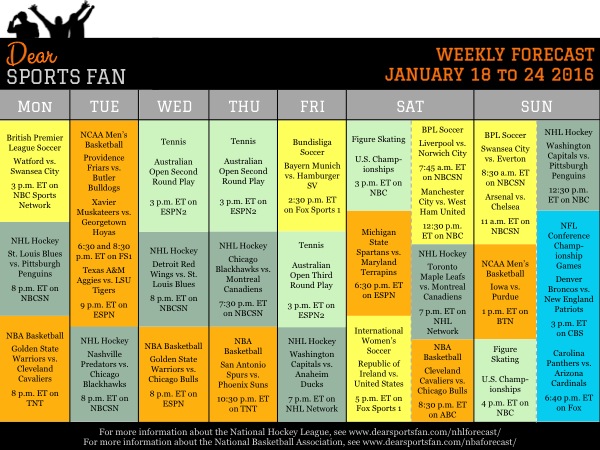 For full coverage of all the NHL and NBA games, see our NHL forecast and NBA forecast.

Monday: It’s a hard choice between watching the always dramatic Pittsburgh Penguins play against the always solid St. Louis Blues or a rematch of last year’s NBA finals between the Cleveland Cavaliers and Golden State Warriors. I think the scale tips towards basketball, or at least it would if I wasn’t a little sportsed our from the long weekend of football.

Tuesday: It’s the best men’s college basketball night of the week with a triple-header of games involving two top 25 teams and/or the likely number one draft pick in next year’s NBA draft.

Wednesday: Sports’ longest season starts with tennis’ Australian Open. Tennis players play for about 11 months of the year, but most fans only care about the four major tournaments. This is one of them, so pay attention! Later on, there are two solid mid-season NBA and NHL games to choose from.

Friday: Date night! If your date is out of town, it wouldn’t be too bad to stay in and watch the hottest hockey team in the league, the Washington Capitals, play against their old coach’s new team, the Anaheim Ducks.

Saturday: Without any NFL playoffs football today, the sports scene dims but only slightly. The top options of the day are a great men’s college basketball game between two of the top three teams this year, the Maryland Terrapins and Michigan State Spartans, and a friendly match between Ireland and the United States in women’s international soccer. Not too shabby!

Sunday: There are only three NFL football games left this year and two of them are today. Don’t miss them! If you want to make a day of it, you can catch a game and a half of British soccer and most of a great hockey game before the football starts.