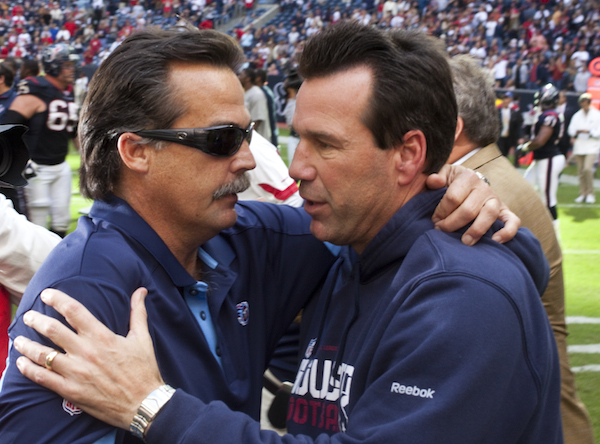 Head coach of an NFL football team is an enormously important and high profile job populated mostly by even more enormously self-important men who never miss an opportunity to raise their profile. As such, it’s actually surprising how little press the two Super Bowl coaches this year are receiving. Both Carolina head coach Ron Rivera and Denver head coach Gary Kubiak are the exceptions that prove the rule. Despite their teams making the Super Bowl, neither one is the center of attention. The plot of this game does not revolve around either of them. They aren’t groundbreaking “geniuses.” Nor is this a redemptive journey for either of them. That doesn’t mean that either of them is uninteresting or has a boring back story though, so without further ado, let’s explore who they are and how they got here.

Gary Kubiak has been connected in some way with the Denver Broncos for most of his adult life. He was drafted as a quarterback by the team in the eighth round of the 1983 NFL draft. This was the same draft in which the team acquired quarterback John Elway, the number one overall draft pick that year, in a trade. So, Kubiak was not drafted to start, but rather to be the backup quarterback — the break glass in case of emergency option. He remained with the Broncos, playing only when Elway was injured, for his entire nine year career. After he retired, he went almost immediately into coaching. His first job as a coach was for the Texas A&M’s college team, where he served as their running backs coach. This is somewhat remarkable — a former player who wants to get into coaching almost always coaches his own position first. The fact that Kubiak’s first job was a cross-positional job says a lot about who he was as a player (observant, interested in what was going on around him even if it wasn’t directly his responsibility, etc.) and a lot about who he was going to become as a coach. From Texas A&M, Kubiak moved into the NFL as an assistant coach, first for the San Francisco 49ers and then for the Denver Broncos, before getting his first shot at a head coaching job for the Houston Texans in 2006.

In Houston, where he coached for eight seasons, Kubiak became a known quantity. He coaches like an ideal backup quarterback plays the position: steadily, unspectacularly, and reliably. He gets the job done. Look at his seasonal records in Houston, where he inherited an unsteady team:

Until that last season, it’s hard to imagine a more mundane but functionally successful coaching record. As was foreshadowed by his first job as a coach, Kubiak is known for leading offenses that excel at running the ball and whose quarterbacks succeed through being an unremarkable cog in the system. Kubiak doesn’t draw a lot of attention to himself on the sidelines. He doesn’t throw temper-tantrums at refs or scream at his players. The only time he ever became the story was when he collapsed on the sideline in 2013 and had to be taken to a hospital. He had suffered the precursor to a stroke but was thankfully able to avoid any long-term harm.

After a year as offensive coordinator of the Baltimore Ravens, Kubiak was hired to become head coach of the Denver Broncos this season by none other than John Elway, Kubiak’s old quarterback buddy from his playing career. This creates an interesting dynamic. After backing up Elway for nine years as a player, Kubiak is back in a subordinate position to him. That’s one way of looking at it, but although team presidents and general managers like Elway can hire and fire coaches, the failure of a head coach is also the primary reason why presidents/general managers lose their jobs. It’s a much more symbiotic relationship than you would expect.

The more interesting plot with Kubiak as coach this year has been his interactions with quarterback Peyton Manning. For most of his amazing career, Peyton Manning has been de-facto offensive coordinator as well as quarterback, designing the offense and calling the shots. Kubiak, as we now know, wants a quarterback to fit into his system, not the other way around. This season could easily be characterized as a struggle between Manning and Kubiak over control of the offense. Because they both have the same goal in mind — winning the Super Bowl — it would be more accurate to say it’s been a collaborative struggle to find a blended approach that works for both men and wins football games. Finally, in the last couple games, they seem to have found it. Kubiak calls plays that put Manning in positions he is comfortable with and Manning executes them in a typically Kubiakian conservative way. It’s gotten them to the Super Bowl. We’ll find out on Sunday if it’s good enough to win.