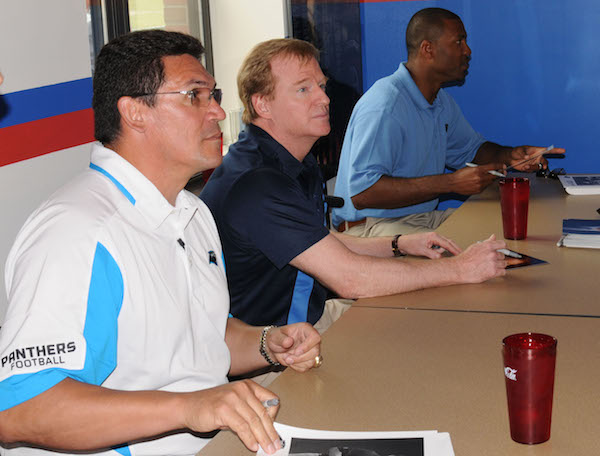 Head coach of an NFL football team is an enormously important and high profile job populated mostly by even more enormously self-important men who never miss an opportunity to raise their profile. As such, it’s actually surprising how little press the two Super Bowl coaches this year are receiving. Both Carolina head coach Ron Rivera and Denver head coach Gary Kubiak are the exceptions that prove the rule. Despite their teams making the Super Bowl, neither one is the center of attention. The plot of this game does not revolve around either of them. They aren’t groundbreaking “geniuses.” Nor is this a redemptive journey for either of them. That doesn’t mean that either of them is uninteresting or has a boring back story though, so without further ado, let’s explore who they are and how they got here.

This is not coach Ron Rivera’s first trip to the Super Bowl. He played linebacker on the legendary 1985 Chicago Bears team, often brought up as having had one the best defenses of all time. Rivera played linebacker for the Bears for nine years before retiring and moving first into the booth as a TV football analyst and then into the coaching fraternity. Until he was hired in 2011 as head coach of the Carolina Panthers, he had always been a defensive coach — either coaching the linebackers on the team or the entire defense.

The best way to illustrate Ron Rivera’s story as a coach in the NFL is to examine his nickname — Riverboat Ron. Riverboat Ron refers to the gambling done on riverboat.

— quick historical diversion: This gambling has had two waves — during the 19th century, when riverboats were a primary form of transportation, professional gamblers used them as an easy way to find bored rich people with nothing to do, swiftly separate them from some of their money, and just as swiftly exit their presence. Once steamboats were superseded by other modes of travel, this habit died down. It was resurrected in the late 1980s when a clever Iowan figured out that a casino, located in a traveling riverboat, would not be under the same gambling prohibitions that a static, land-based casino would be. This trick turned into a trend, and so the second great era of riverboat gambling started. Now-a-days, many of the riverboat casinos are either “boats in moats” that never travel anywhere or even simply buildings built on stilts over water. end diversion —

Rivera got his nickname during the 2013 season. He started the year on shaky ground, having gone an uninspiring 13-19 in his first two seasons. He was particularly under fire among fans and in the media for being overly conservative. His decisions to do things that were widely perceived as safe but misguided, mostly preferring to punt or kick field goals on fourth down instead of “going for it” were blamed for his team’s poor record in close games. This pattern continued for the first two games of the 2013 season. In the third game, it reversed. In the third game, Rivera made the “aggressive” choice and it helped his team win the next game. He cemented this change of tactics by making a similar choice in each of the next five games. That was enough of a sample to seem like he had changed, not just his tactics, but his personality as well. Riverboat Ron had earned his nickname.

According to Wikipedia, Rivera is not the biggest fan of his nickname. He prefers to think of what he does as “calculated risk taking” not gambling. Many football fans would disagree even with that. Just before the time Rivera made his “transformation,” football thought went through its own transition in how it thought about those decisions. Statisticians who descended toward football from other sports, like baseball which had an earlier statistical revolution, made it clear that almost all coaches had been doing their teams a disservice by being far too conservative. This gave rise to clever gags like the New York Times Fourth Down Bot which analyzes fourth down situations and comes up with the statistically correct answer. Seen through the eyes of macro football history, Rivera did not transform from a conservative to a radical coach, he simply adjusted to the new conservatism.

Whatever he has done as a coach has been greatly assisted by the remarkably talented players he has on offense and even more so on defense. These days, Rivera is looked at as a very good leader who delegates well to clever assistant coaches and creates a wonderful environment for his many talented and quirky players to thrive.