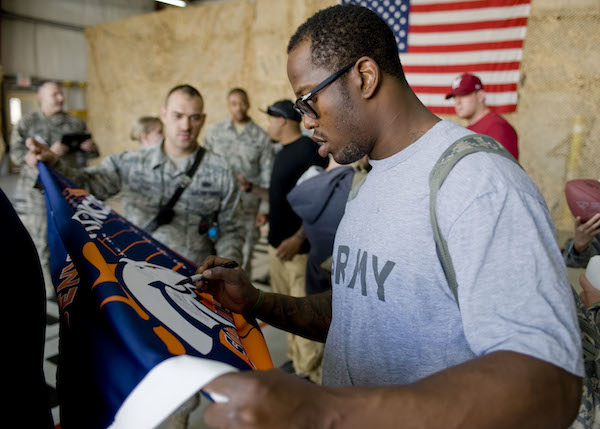 There’s a cliche in football that “defense wins championships.” This year, it will definitely be true. No matter whether Carolina or Denver wins the Super Bowl, many will point to the defensive side of the ball as the reason for their victory. Football Outsiders, a website that produces innovative and trustworthy football statistics concludes that Denver had the best defense this year and that Carolina had the second best defense. To get a better appreciation for the defensive side of the ball, let’s explore some of the most important players. First, we’ll look at Denver.

What’s the story with the defensive linemen on the Denver Broncos?

Derek Wolfe – Wolfe is a gargantuan defensive lineman. He’s listed as being 6’5″ tall and 285 lbs. Even in a sport like football, where giants are a run-of-the-mill sight, Wolfe sticks out. As a 3-4 defensive end (if you don’t know what that means and want to, read the article on defensive linemen linked above,) Wolfe is expected to play a hybrid game, half attacking the quarterback, half being the first line of defense against the run. Wolfe provides both of those services to his team spectacularly. In fact, he has been so spectacular this year compared to his first few years in the league, that a neutral observer is forced to wonder how he improved so much. Add that wonder to the four game suspension he served at the start of the year for breaking the NFL substance policy (he claimed he took a medicine he didn’t know was against the rules) and you’ve probably got your answer. The truth is, most football fans don’t actually care very much if professional players are taking drugs to stay on top, they just enjoy watching them play.

What’s the story with the linebackers on the Denver Broncos?

Von Miller – Von Miller is a swashbuckling linebacker. He lives to sack quarterbacks. And he is great at it, potentially historically great. At the start of this season, he became the third fastest player to reach the 50 sack mark, behind only Reggie White and Derrick Thomas, both retired hall of fame players. Although Miller has his own unfortunate past (a six game performance enhancing drug suspension, several speeding tickets, an arrest for failure to pay the speeding tickets…) he’s also an enjoyably colorful character. He’s the only one in the game who could inspire this paragraph in a Boston Globe article: “Chicken farming is just one of his many odd passions. He wears thick, plastic-rimmed “geek chic” glasses, wears a giant Russian fur trapper hat and eccentric cowboy boots, and covered his body in random tattoos, including one of a chicken, or “Chicken Fred,” on his leg. He was the only rookie to put his name on the NFL Players Association’s lawsuit against the NFL in the 2011 lockout. His sack dances and celebrations are worthy of “Amercia’s Best Dance Crew.”

DeMarcus Ware – DeMarcus Ware is a savvy veteran still capable of making explosive plays. He played nine years for the Dallas Cowboys and was the team’s defensive leader. Because the Cowboys are simultaneously the most loved and most hated team in the league, this made him a very well-known player. Even the most ardent Cowboys haters developed a grudging respect for Ware, particularly because during his time with the team, they never won very much or succeeded in the playoffs, despite Ware’s efforts. He left the team in 2014 and signed with the Broncos. He has flourished there, despite his age, and provided both mentorship and high quality performances on the field.

What’s the story with the defensive backs on the Denver Broncos?

Aquib Talib – Cornerback Talib is a perfect example of how contextual success in the NFL can be. As a highly respected player in college, Talib was drafted in the first round of the NFL draft. That guarantees a player an enviable first contract but it’s no guarantee of success. Success is much more multi-factored than that and perhaps the biggest factor is which team a player is drafted by. Talib was taken by the Tampa Bay Buccaneers, who were just entering a dysfunctional phase that has lasted until today. Talib never quite lived up to his billing there. Then, in 2012, he signed as a free agent with the New England Patriots, one of the most ruthlessly functional teams in the league. He was a star. From the Patriots, he moved to the Broncos, another high functioning organization, and has continued to be an excellent player. Context matters. Talib is a big, physical corner who is as likely to knock a receiver off their timing at the line of scrimmage (contact with a receiver is allowed for the first five yards from the line of scrimmage) as he is to drop back and try to run with him.