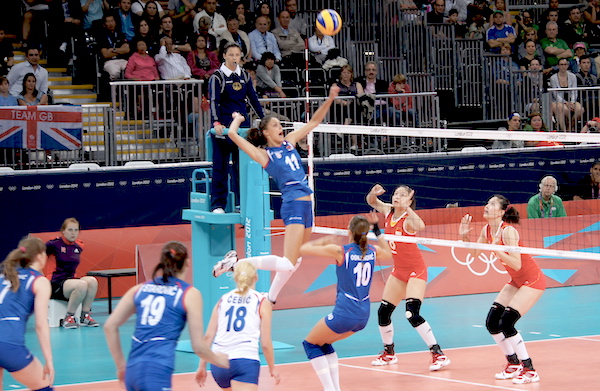 Volleyball was my favorite sport in gym class. It’s the ultimate team sport. It punishes all selfish play, which was great in high school when you wanted nothing more than to bring the jock boys down to your size. At the Olympic level, this facet of the sport may have translated into an odd form of dominance. Of the 13 times volleyball has been in the Olympics, communist or former communist countries have won the gold six times in the men’s event and whopping nine times in the women’s event!

How Does Volleyball Work?

Volleyball is played by two teams of six players each. The teams line up in two rows of three on either side of an eight foot (seven feet, four inches for women) net. The ball, which is a little smaller and lighter than a soccer ball, must be kept in the air by hitting it with any part of the body — this is a little known aspect of volleyball’s rules, which is equally little used; the ball is pretty much only ever hit with the hands. Let the ball drop on your team’s side of the court and the opposition gets a point. Likewise, if the ball drops to the ground out of bounds and you were the last person to touch it, the opposition gets a point. Matches are played divided up into a maximum of five potential independent games called sets. The first team to win three sets wins the match. The first four sets are played to 25 points (must win by two) and the last one, if necessary, is played to only 15 points. This is interesting because it’s kind of the opposite of how other sports like tennis or ice hockey think about the end of games. If tennis has different rules for a final set, it’s to make it potentially longer, not shorter, and the same is true of overtime in hockey.

You might also wonder why one player is wearing a different color than everyone else on their team. Oddly, my post answering this question is the most consistently popular post on this entire site. The short answer is that this player is called the libero and they are a defensive specialist who is allowed to ignore most rotation and substitution rules but who cannot move close to the net to spike.

I wrote a whole post about why people like volleyball. If you’re interested enough to read this, I recommend you read that too. The quick summary is that volleyball has great vocabulary words, that it punishes selfishness, it scaled well with the player, it has a good mix of competitiveness and collaboration, and that at the Olympic level, it’s incredibly athletic.

Volleyball has a men’s and a women’s event.

How Dangerous is Volleyball?

For a sport where ball speeds can reach 80 miles an hour, volleyball is surprisingly safe. The ball is light enough not to break anything important, even at that speed.

What’s the State of Gender Equality in Volleyball?

The major difference is in the height of the net. Men play with a net that is eight inches taller than the net played on by women. As with several other events, we can decide to be annoyed about this or not. It depends on if you think differences in average height by gender should be honored with rule adjustments.

Bookmark the full Olympics schedule from NBC. Volleyball is from Saturday, August 6 to Sunday, August 21.

Read more about volleyball on the official Rio Olympics site.