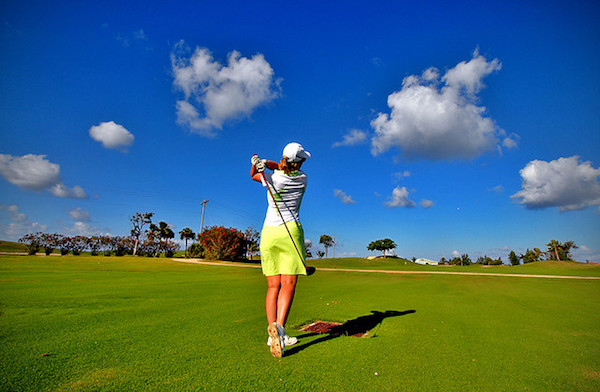 Golf is one of the world’s great games but it hasn’t been in the Olympics for 112 years. It returns, somewhat less than triumphantly, in this year’s Olympics.

How Does Golf Work?

The goal of golf is to propel a small, hard white ball into holes in the ground by hitting it as few times as possible with a club. The player who can do this 72 times over three days using the fewest hits (called strokes) wins an Olympic gold medal. Players are competing against each other, but their main adversary often seems to be the designer and landscaper of the course itself. In navigating one’s way to the hole, golfers must deal with fiendishly placed pits of sand, clumps of higher grass called rough, and any number of hills or man-made lakes or rivers.

Although I am not someone who enjoys watching golf (I almost fell asleep just looking for highlights to include in this post), I understand that many people do. One segment of people who enjoy watching golf are golfers! There’s something about having done it yourself that increases the enjoyment you get from watching others do it. Golf does have a wonderfully leisurely pace to it. Convention calls for announcers to speak quietly during broadcasts. All in all, there is a pastural quality to golf that’s appealing, even to the non-golfer.

There are only two golfing gold medals available, one for men and one for women, both in individual competition. This is a real shame, because golf has some very clever ways of transforming itself from an individual pursuit into a team game. These different formats are a large part of what makes men’s golf’s premier international event, the Ryder Cup, so popular.

How Dangerous is Golf?

Don’t golf through a thunderstorm. Otherwise, you’ll be okay.

What’s the State of Gender Equality in Golf?

Golf approaches gender equality in its format. The only difference is that women start closer to each hole than men do in recognition of the fact that they, on average, do not hit the ball as far as male golfers.

Bookmark the full Olympics schedule from NBC. Golf is from Thursday, August 11 to Saturday, August 20.

Read more about golf on the official Rio Olympics site.