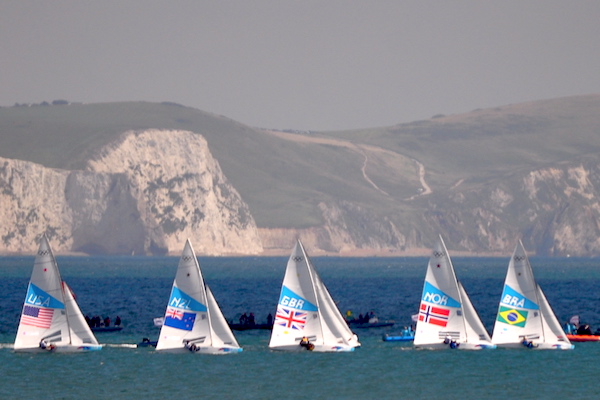 If summer is all about finding a way to be in the sun and the water, than sailing is the perfect activity. If your enjoyment of sports is based primarily on tactics, than it might be a great viewing opportunity for you, even if you can’t find a way to set up your television near a pool.

How Does Sailing Work?

All of the Olympic sailing races are “fleet races.” In this case, although speed is important, the word fleet means that a group of ships sails together, as opposed to individually around a course. In every category of sailing, the vessels are under strict rules to ensure that the difference between the best and worst (of the best) sailors in the world comes down to skill, not technology. Skill, in sailing has a physical component — who can adjust their sails the fastest or eek the most speed out of their boats by leaning far over the side as a counter-weight — and a mental component — who can read the wind and the water and adjust the fastest and best to the conditions to pick the optimal route. There’s also an element of luck, because no matter how you cut it, the conditions will be slightly different in every part of the water at every moment.

Sailing is the Olympic sport that approaches a tactical board game the most closely. Yes, there is a physical element to sailing, but that often gets lost in the wide-angle camera shots necessary to show several boats at once. Instead of watching athletes sweat, and deriving pleasure from that, viewers of sailing watch athletes think and take tactical risks, and derive enjoyment from that.

Sailing events are defined primarily by the category of boat used. These categories are defined by weight and shape as well as feature, including such things as whether it has a trapeze (a wire from the mast down to the hull that allows a sailor to hang over the edge of the boat to create more speed), a jib (the sail that extends from the mast toward the front of the boat), or a spinnaker (extra poofy sail). Of the ten sailing events at this year’s Olympics, five take a two person crew and five a solo sailor.

How Dangerous is Sailing?

Sailing is a very dangerous sport. The most dangerous races are the long-distance ones which take ships far from land and far from help if something were to go wrong. Even in Olympic style racing, two ships colliding or any kind of equipment malfunction or human error can have disastrous consequences.

What’s the State of Gender Equality in Sailing?

Sailing is a little off-kilter now, with men having an extra event, four, to three for women with a mixed crew (one man, one woman) required for an eighth event. You’ll also notice that for the most part, men and women race in different boats. The boats for women’s events are designed for lighter sailors than the ones in men’s events.

One interesting note about sailing is that until 1988 it was a gender-free event. There were no gendered events at all and women were simply expected to compete with men.

Bookmark the full Olympics schedule from NBC. Sailing is from Monday, August 8 to Thursday, August 18.

Read more about sailing on the official Rio Olympics site.