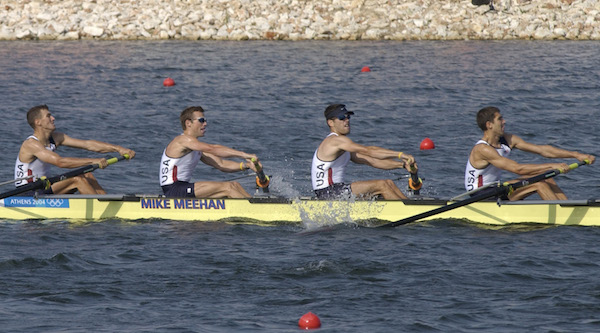 I have become an Olympic junkie this year. I watch it all, from volleyball to table tennis to swimming! I have a question about rowing. I was watching a race and some of the boats qualified for the semi finals and some for something called a repechage. What is a repechage and how do repechages work in Olympic rowing?

How cool that you’re enjoying the Olympics this year. A repechage is certainly a rare thing in sports. I wondered about it as well. It comes from the French verb, “repêch” which means literally to “fish up again.” Idiomatically, it means “to get a second chance.” In the context of rowing, a repechage is a race that gives athletes a second chance to advance to the next round in their event.

The way a repechage works in rowing depends on how many boats are racing in that event. In smaller events, the top two or three boats from each heat (the first race in an event) qualify for the semifinals. The rest of the boats get one more chance to qualify for the finals by placing in the top two or three of a repechage against other boats who did not qualify. In larger races, the repechage may sit between the initial heats and a semifinal race. In addition to rowing, Olympic track cycling has repechage races in the sprint and keirin events.

Do repechages make sporting events more or less fair? You could argue both positions. On one hand, having a repechage means that a single mistake can’t eliminate a team. If a great team has a terrible day, they can come back, win the repechage, or at least do well in it, and still make the finals or semifinals. On the other hand, the use of a repechage may make the semifinals or finals less even. Setting aside the fact, for a moment, that teams that lose an early race tend to be worse, on average, than teams that win an early race, the repechage still presents a problem for competition. By the time the finals come around, a team that had to go through a repechage has suffered through at least one more race than athletes who won their first race. This effect of a format isn’t unheard of — some American football teams get a “bye” going into the playoffs, meaning they play one fewer game than their opponents — but in a competition with a compressed schedule, like the Olympics, this can really tilt things. Now you have athletes who could not win their first race and who are now more fatigued than their opponents, going up against them in a final or semifinal. It’s a rare feat to come back from a repechage and win a medal!