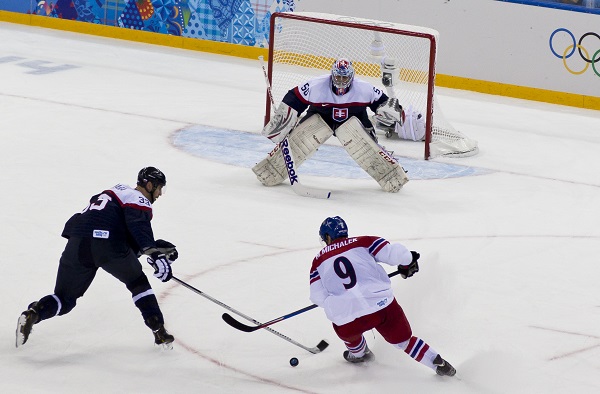 The biggest story of 2018 Olympic Ice Hockey is the decision of the National Hockey League (the NHL is the American men’s professional ice hockey league, widely considered the best in the world) not to allow its professionals to take part in the games. While knowing that story may get you in the door, it won’t help you very much once the games begin. Here’s a detail to watch which will keep you interested and sounding like an insider: in addition to watching the puck, watch the line changes.

Hockey is the most exhausting team sport in the world. Even the best ice hockey players in the world simply cannot play for more than about a minute at a time. Unlike football, play in ice hockey doesn’t stop and start frequently to conveniently allow for substitutions. Tired ice hockey players need to find a moment when sprinting to their team’s bench to be replaced by a teammate won’t hurt their team. The best time for a line change (when two or three teammates all go to the bench and are replaced by teammates) is when your team has the puck or has dumped it way behind the other team into their defensive zone where it’s going to take them a little while to fetch it.

Being aware of line changes may seem like a small thing or perhaps even a little boring but they can be quite dramatic. A bad line change often results in a scoring chance against the team that made the bad change. In a low-scoring game, one or two bad line changes can be enough to decide who wins and who loses. A good line change is sometimes the result of one player, already exhausted, pushing herself through her exhaustion to allow her teammates to get off the ice.

A veteran ice-hockey fan has an imaginary clock in his or her head that counts from each line change up to around 35 seconds. At 35 seconds you start getting curious about how your team will manage to change lines. At 40 seconds, the tension begins to mount. At 45, you are actively rooting for your team to get the puck into a good line change position. At 50, you are starting to panic and at 55 you’ve started to scream at the television. Make it to 60 seconds and you’re usually depressed over the goal your team just let in.

As a bonus, there is also a potential penalty associated with line changes called Too Many Men on the Ice (note that some women’s leagues use this language and some call it Too Many Players on the Ice). This penalty is called when a line change has gone so disastrously wrong that a team ends up with, you guessed it, too many players on the ice! It’s a near unforgivable offense in hockey because it costs a team two minutes playing with one fewer player on the ice than the other team. During normal play, this almost never happens, but in pressure situations, when players are tired and stressed, it does happen. If you have gotten used to watching the line changes, you will catch this and be the first person at your viewing party yelling about it.