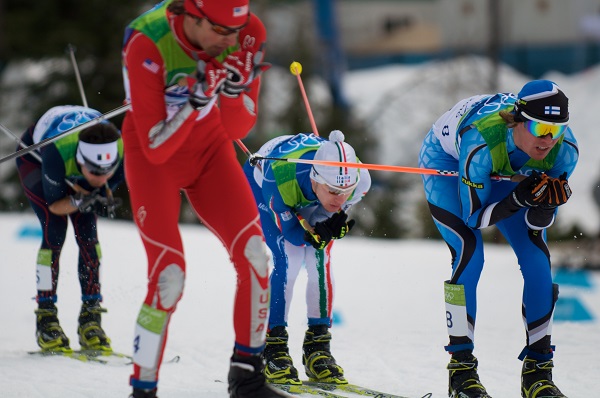 Cross country skiing is a beautiful sport to watch. Although the courses are designed to have an equal amount of uphill, downhill, and level sections, they are often perched in pristine mountains and wind through old forests. It’s a picturesque and predictable sport that Olympics television producers take advantage of by staging simply gorgeous camera shots of. The only problem is, at least for me, it’s often hard to tell whether the skiers are going up a hill, down a hill, or neither. As anyone who has ever skied will tell you, the problem is that the white snow doesn’t lend itself to depth perception particularly well. So, the detail to latch onto in watching Cross Country Skiing is which way the skiers are going: up, down, or level.

This distinction is complicated by the bifurcation of cross country events between classic and skate skiing style. In classic, skiers are only allowed to move their skies back and forth. In skate skiing, skiers are allowed to move their skies sideways. Skate skiing is newer and faster. If you know which technique a skier is using and you observe how she uses her poles and skies, you will be able to tell if she is going up, down, or sideways.

Distinguishing up, down, and flat for classic cross country skiing is harder. The limitations on how a skier may move her skies also limit the variety in technique that adapts to the pitch of the course. Still, with a little focus, it is possible.

Learning these clues to when a cross country sky race is going up, down, or sideways will help you enjoy the Winter Games and put you in the top five percent of educated viewers.