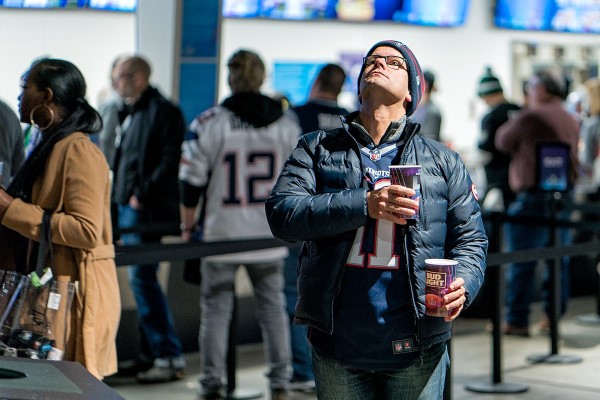 Super Bowl LIII will be played between the New England Patriots and Los Angeles Rams at 6:30 p.m. on Sunday, February 3, 2019 and will be televised on CBS. Sorry, I know that wasn’t your question, but that’s how all blog posts about the Super Bowl must begin. This year’s game promises to be a good one. As a football (and New England Patriots) fan, I am already getting excited to see it. Like all Super Bowls, however, it has attracted a lot of narratives. It is more fun to watch the game if you understand the plot, so I’ll do my best here to explain some of the most common interpretations of this year’s Super Bowl and evaluate how true they are.

This will be a three-part post. Part two looks at the “passing the torch” narrative. Check back to catch part three soon!

“No One Believes in Us”

After the Patriots won their first game of the playoffs this year, they and their quarterback Tom Brady immediately attracted widespread disbelief and scorn for “playing the nobody believes in us card.” As you probably know, (to paraphrase Napoleon,) an army travels on its stomach but a sports team travels on cliche, and there’s no more seemingly effective cliche in team sports than to claim that “nobody believes in us.” It is a cliche that cements teammates together and fosters a sense of besieged fraternity that can overcome any odds.

On the face of it, relying on the power of cliche seems… unlikely to work, but as Brian Phillips pointed out in his recent homage to tennis player Andy Murray on The Ringer, there is a logic to it:

Spend any time around professional sports and you realize that the armature of cliché by which athletes tend to describe their experience is mostly a survival tactic. The athletes aren’t stupid. They’re simply trying to shore up the resources to compete in an unforgiving environment. If nuance is a tool of doubt and doubt is fatal, you eliminate nuance. You simplify. Say anything often enough and you believe it.

For evidence, they point to their unprecedented sustained success: since Belichick became coach of the Patriots in 2000 and Brady quarterback in 2001, the Patriots have won the Super Bowl five times, they’ve made it nine times. They are currently on an unholy streak — this is the third straight year they’ve played in the Super Bowl and the fourth out of the last five. Right before the AFC Championship game (a semifinal for the Super Bowl) someone changed the Wikipedia article on the game to read, “The AFC Championship Game is the annual championship game of the American Football Conference (AFC) where one team gets to play the New England Patriots for a chance to play in the Super Bowl” and it wasn’t even statistically that much of an exaggeration. Tom Brady is widely thought of as the GOAT or greatest of all time to play quarterback. Bill Belichick is likewise thought of as the greatest coach of all time. So how can the narrative possibly be that “no one believes” in the Patriots?

It’s not. “No one believes in us” from the Patriots point of view is a false narrative but the backlash against it is also a little bit misleading. While it’s clearly not true to claim that no one believed the Patriots making or winning the Super Bowl was possible, it is true that most observations of the Patriots  at this point include a generous pinch of disbelief. Their sustained success is unlikely:

Patriots are not underdogs but they have been overdogs for so long that the longer it continues, the more unbelievable its duration becomes.