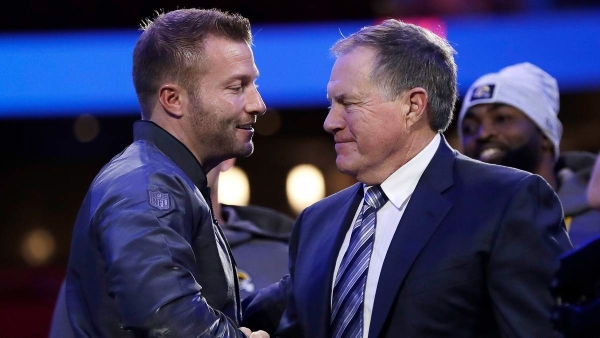 Thanks again for your question. This is part two of a three part answer to it. At Dear Sports Fan, we believe that following sports like soap opera is the most enjoyable way of interacting with sports, so narratives are important! In Part One, we examined the “nobody believes in us” narrative that the Patriots are trying to impose on the Super Bowl and which has inspired quite a backlash. In this post, we’ll evaluate another common Super Bowl LIII narrative — that this is a symbolic passing of the torch from the New England Patriots to the Los Angeles Rams.

The Patriots coach, Bill Belichick is a consensus figure on the NFL’s coaching Mount Rushmore, as respected as he is reviled. Success in sports almost always inspires hate because it is literally zero sum. If the Patriots win, 31 other teams do not win. On top of that, Belichick responds to media questions in a manner that is brusque to the point of being rude. Still, the most common adjective applied to Belichick is “genius” and it’s somewhat fitting. More than any other person, Belichick has imprinted his own personality and ideas about how things should be done on the Patriots organization. Here is just a sampling of these ideas, many of which you will hear announcers talking about:

If you think these seem obvious, you’re right! I think that’s why the term genius kind of applies to Belichick – in my experience, genius discoveries or inventions always seem obvious in retrospect – gravity, the printing press, sewers – but a mark of Belichick’s greatness is that even though his ideas are known, they are difficult enough to execute that he still gets an advantage by doing them.

Sean McVay, the Los Angeles Rams coach has his own adjectives that get applied to him. He gets “genius” as well but more often “prodigy” or “savant”. This is partially because of his age. He became a head coach at 30 and had nearly instant success. He is 33 now. It’s also because somewhere along the line, someone discovered that with a tiny amount of prompting, he could recall seemingly every play in any game he’d ever been a part of.

The memory is just window dressing, of course, that confirms and emphasizes the impression people already have of McVay. One of the most obvious of his successes has been his impact on Los Angeles Rams quarterback, Jared Goff. Goff was drafted first overall in 2016, the year before McVay became head coach. His rookie season was spectacularly bad — so bad that when the team fired their coach and interviewed for a new one, the assumption was that anyone who claimed to be able to improve his play was lying for the sake of getting the job. Under McVay, Goff has become one of the best young quarterbacks in the league.

McVay is so well respected that he is shaping the way other teams think about hiring. This year, the running joke was that the only way to get a head coaching job in the NFL was to have worked with Sean McVay. When the Arizona Cardinals hired Kliff Kingsbury, they made sure to include a line in their announcement that announced to friends that he was “friends with Sean McVay.”

The presence of two great coaches in the Super Bowl, one who is 66 and one who is 33 is a notable feature of the game but the narrative that this game is a passing of the torch is almost definitely a false one for a few reasons.

There’s no sign that Belichick is going to retire any time soon, so that side of passing of the torch might be premature. The concept of a passing of the torch also seems to include the idea that the Rams are likely to have a dynasty similar in duration and success to the Patriots. Signs already point to that not being true. Not only is the Patriots success extremely rare but the Rams have some clear financial issues on the horizon that will limit their ability to stay at the top. (This is complicated enough to merit its own post but basically the Rams won’t be able to keep all of their star players for more than another year or so.) Although I am, as an observer, interested in what choices these two “genius” head coaches will make to try to beat each other, I feel positive that neither of them has spent a second in the lead-up to the game thinking about torches.

In favor of this narrative, people will point to a small symmetry. The Patriots dynasty began in the 2001 season when they won their first Super Bowl against (drumroll, please) the St. Louis Rams! How elegant, how cyclical would it be if they finished their dynasty by again beating the Rams? Or conversely, that the Rams began a dynasty by beating the Patriots in the Super Bowl? For me, this just points to how false the entire narrative is. 2001 was a different world from 2019. Almost no one (aside from Belichick and Brady) who was involved with the teams back then is still involved today. One of the teams doesn’t even play in the same city! Sports narratives aren’t that neat.