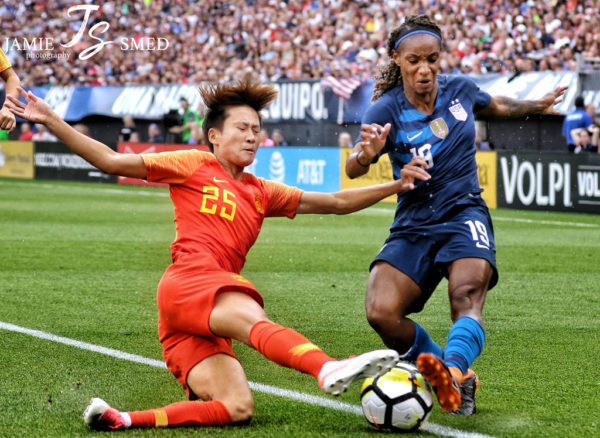 National team experience: Dunn has 84 appearances and 24 goals for the national team. This is her first World Cup. During the 2019 SheBelieves Cup, she played two whole games at defense and started one game as a striker, replaced by Carli Lloyd in the 87th minute.

What to expect from Crystal Dunn in 2019:  “Crystal Dunn, Defender” is one of the weirdest parts of this year’s team and yet it explains so much. Crystal Dunn is probably one of the world’s best 20 strikers. In 2015, she led the NWSL in scoring. So far this year, she has four goals in three games for the North Carolina Courage. She’s lightning in a bottle. So, why is she playing defense on the national team? One reason is that being one of the best 20 strikers in the world doesn’t help all that much when the U.S. has five or six of those best 20 and several of them are better than you. The second, and perhaps more meaningful reason is that coach Jill Ellis has spent the past four years tinkering with the idea of playing versatile attacking players in the outside defensive positions instead of defensive ones. This isn’t a radical idea (in fact, it was a formative one for people my age, because it’s how the Brazilian men’s team won the 1994 World Cup in the U.S.) but the extent to Ellis’ commitment to it is striking. Dunn is effective at this hybrid attacking defender role. Despite of (or because of) her height, she’s a tough enough tackler to more than hold up on defense, and having another world class attacker sprinting up the wing when the U.S. has the ball should strike fear in opposing teams. She’s the first choice outside defender for the team and should play most of the time during the World Cup.

Non-gendered personal interest item:  Dunn was universally considered the “last player cut” from the 2015 World Cup team. That was the year she won the NWSL’s most valuable player award and its Golden Boot for most goals scored, which tells you a little bit about her skill and competitiveness.

Links: Here are her Wikipedia page, U.S. Soccer page, and Twitter. Plus an article about her from Sports Illustrated.