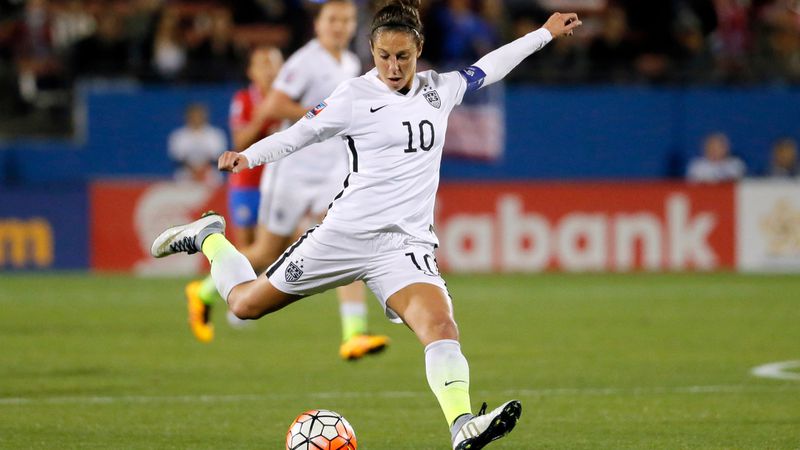 National team experience: Lloyd has played 274 games for the national team and scored 110 goals. During the 2019 SheBelieves Cup, she came on as a sub in the 85th, 87th, and 88th minutes of the three games.

What I wrote in 2015: Carli Lloyd is one of the most powerful soccer players in the world. From her position in the center of the midfield, (although coach Jill Ellis has experimented with her in an outside midfield role), Lloyd works tirelessly on offense and defense. She is noticeably stronger than almost everyone else in the sport… Lloyd doesn’t have the vision, dribbling, or passing abilities of some of her midfield counterparts, but she more than makes up for it with power and determination. Lloyd should play close to every minute of the World Cup this year.

What to expect from Carli Lloyd in 2019:  What Abby Wambach was to the 2015 World Cup squad, we hope Carli Lloyd will be to this one: a great player well past her prime who provides leadership mostly from the bench. While I have confidence that Lloyd will do everything in her power to support the team, I worry because of her position. Lloyd is a central midfielder. Wambach was a striker. Strikers are kind of like an extremity while the central midfielder is the heart of the team. In the 2015 World Cup, Wambach got into games that were essentially already decided and her team was happy to feed her the ball and try to get her some more international goals. Subbing in a central midfielder is more disruptive, even in games the United States has in hand. Lloyd’s style magnifies that difficulty because she plays so differently from the players most likely to start in her old position this year: Lindsay Horan and Rose Lavelle. Both of those players are playmakers – Lloyd is a scorer. If she can’t get any meaningful playing time, will she be able to lead from the bench? If she disrupts the team when she’s in, will her teammates appreciate her?Lloyd’s belief in her own ability to dominate games is still strong, as is her right. What if she refuses to sit on the bench gracefully? Everything will probably be fine on this front, but I still worry.

Non-gendered personal interest item: Uh, of interest perhaps only to myself, Lloyd is almost exactly the same age as me and went to the same college as I did for the same four years. So, when I write about her needing to age gracefully and not being sure she’s ready for that, am I being a clear-headed blogger or just projecting…?