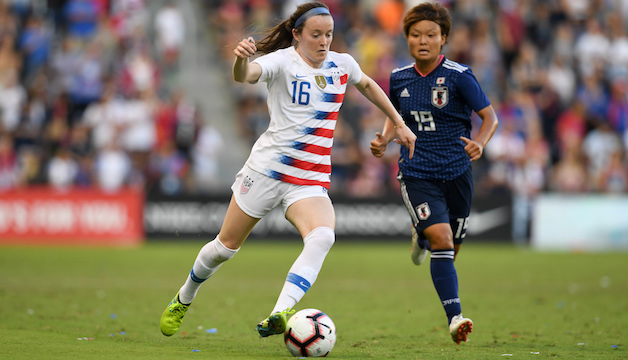 National team experience: Lavelle has played 27 games for the national team with seven goals. During the 2019 SheBelieves Cup, she started two games, playing the full 90 minutes in one and being subbed in for in the other. She did not play in the third game.

What to expect from Rose Lavelle in 2019: Rose Lavelle is the USNWT’s wild card. She’s the joker in a card game, the knight in chess. She moves a little differently than everyone else. She’s less predictable. The USWNT’s offense is projected to be a well oiled machine. Alex Morgan in the front, running at the defense and scoring goals. Megan Rapinoe and Tobin Heath on the wings, breaking ankles and sending arcing crosses into the box. Lindsey Horan in the center, distributing the ball. Kelly O’Hara and Crystal Dunn sprinting up the sidelines from their wing back positions. Rose Lavelle is expected to fill the last slot in what is essentially a six player attack, but what exactly will she be doing? If all goes well (and injury-wise for Lavelle, things have so often not gone well during her career,) Lavelle will be wandering, probing the defense for weaknesses, thinking three steps ahead so that she’s open well before anyone is even thinking of passing it. Once she has the ball, watch out. She has (almost) Tobin Heath’s one-on-one ability AND (almost) Megan Rapinoe’s vision AND (almost) Christen Press’ shooting touch. She can be, as Noah Davis claimed in a Bleacher Report article, the “American Messi.” Will this be the tournament that Lavelle becomes a household name? Hard to see when the U.S. attack is so crowded with bigger names already but I’ll be rooting for it. She’s just so fun to watch when she’s firing on all cylinders.

Non-gendered personal interest item: Rose Lavelle was selected first overall in the 2017 NWSL draft by the Boston Breakers. The team was dissolved at the end of the season, making her (for now) the last first draft pick of a team whose brand had been around for longer than most women’s teams, having been a part of the WUSA starting in 2000. I still hope the team is somehow reanimated!

Links: A piece from Bleacher Report that claims Lavelle is the “American Messi” and one from Forbes about her “magic”, plus her Wikipedia page, U.S. Soccer page, and Twitter.