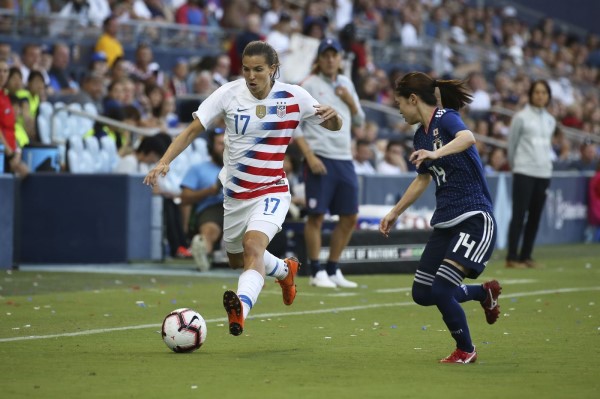 National team experience: 150 appearances and 30 goals. This will be Tobin Heath’s third World Cup. During the 2019 SheBelieves Cup, Heath played all but five minutes of the tournament.

What I wrote in 2015: You know that kid on your youth soccer team who just never stopped running? He or she might not have been the biggest, the most skilled, the strongest, the most aggressive, or the most clever player, but they just never, ever, ever stopped running. When your team was on the attack, she was there. When your team needed an extra set of legs on defense, there she was. And she never, ever, ever seemed even a little bit tired. That’s Tobin Heath. Heath plays an attacking midfielder role for the national team. In this World Cup, she’ll most likely be coming off the bench to replace Christen Press or another starting midfielder.

What to expect from Tobin Heath in 2019: Of all the players from the 2015 World Cup team, Tobin Heath has improved the most over the past four years. She is still an extraordinary one on one player but because many of the other facets of her game have risen to match her ball skills, that facet of her game is less notable. She’s now a well-balanced attacking midfielder with the ability to score with her head and her feet, up close and from far away. In the past she could get isolated quite easily out on the wing — she would sprint onto a ball, beat a few defenders, often making them look foolish in the process, and then waste the ball with an errant shot or a pass to an empty spot on the field. Now she’s more connected to the players around her, her talents more in sync with the team. She should be an absolute fixture on one side of the midfield, with Megan Rapinoe, giving the United States the best pair of outside attacking midfielders in the world.

Non-gendered personal interest item:  Tobin Heath is a rascal addicted to nutmegging her teammates and coaches.