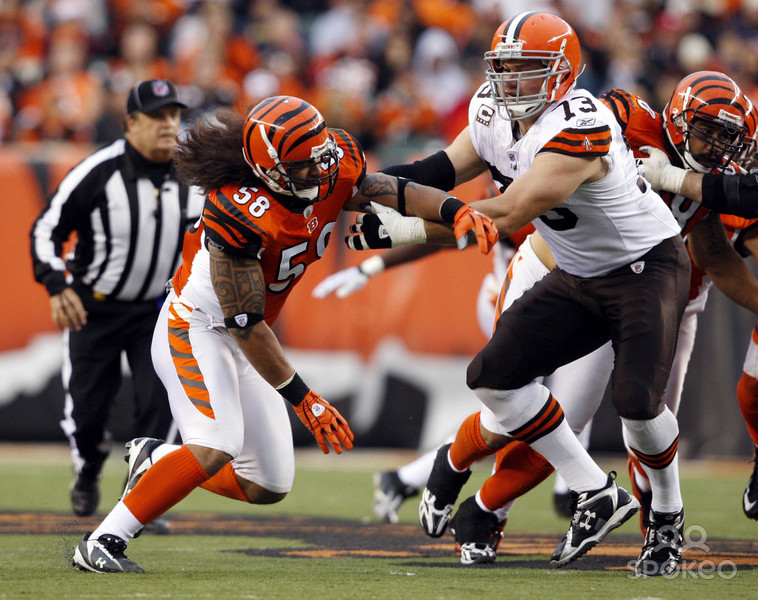 Last ditch attempt, huh? I too am a lover of detective novels but when it comes to introducing someone to American Football through a mind-blowingly good read, there’s only one book I would recommend: Michael Lewis’ The Blind Side.  I know you might be thinking “wasn’t that that chick flick from a couple years back starring the woman from Speed?” And you’d be right — yes, the material from the book was made into a movie

starring Sandra Bullock in 2009. I’ve seen parts of it and I think it’s probably a good movie but it probably wouldn’t get your friend’s wife into football. The book? The book might just do it.

. The book has two key chronological stories. One, the one that the movie focuses on, is the story of a young, poor black boy growing up near Memphis. Michael Oher, the kid, is taken in by a rich white family and grows physically and academically until he is a 6’4″, 300 pound potential star college and eventual high NFL draft pick playing the position of left tackle. This is a great story in and of itself, and Lewis does a great job telling it without flinching or sensationalizing any of its many dicey elements — from Oher’s extreme poverty, to his academic and social struggles, to the suspicion that the Tuohy family (who basically adopt Oher) have designs on his playing for their alma mater, Ole Miss.

The other side of the story is a remarkably accessible history of football’s tactical evolution from being dominated by teams that could run the ball the best to teams that pass the ball the best and the effect that this evolution had on the position of left tackle. The left tackle is one of the offensive line-men, and thirty years ago the left tackle was just one of the offensive linemen, the big guys whose job it is to either clear the defense away from where the running back wants to run or to protect the quarterback from defensive players). As football began to tilt towards emphasizing the pass and the left tackle starting increasing in importance until around the time Michael Oher was in high school, when the left tackle was usually one of the top three players in terms of salary and importance. Why the left instead of the right tackle? Well, because most quarterbacks are right handed, when they prepare to throw the ball, their body is perpendicular to where they want to throw it, with their right arm cocked back. In this position, they cannot see defenders attacking them from the left side of the field. The left tackle protects a quarterback’s blind side when he is passing the ball.

The brilliance of the book and the cleverness of its title comes also from a mostly hidden third narrative. This narrative asks a tough question about our society. If so many semi-miraculous things had to go right for Michael Oher’s talent to make him successful, how many other talented poor children are we missing out on? If rags to riches is so insanely difficult on the football field, where talent is so objectively measurable (again — 6’4″, 300 pounds, and unbelievably athletic) how difficult is it for our society to identify talent in more subjective fields? The quarterback’s blind side makes him vulnerable to defensive rushes. He needs a strong left tackle to protect him. Social stratification makes our culture vulnerable to missing out on some of its brightest talents. Where’s our country’s left tackle? On top of being a touching story and a great tactical history of football, The Blind Side

, is an insightful, challenging book about America.

Let me know if this works,
Ezra Fischer 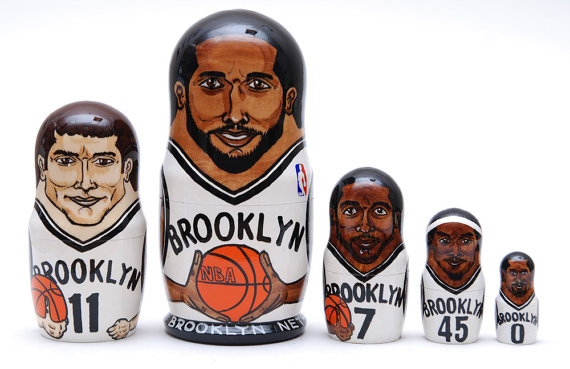 We’re starting a new feature for Dear Sports Fan — gift suggestions for the sports fan in your life. Please let us know what you think of this! Do you ever need recommendations for sports related gifts? How do you feel about giving sports related gifts? We’re thinking we will mostly search for gifts that are a little off the beaten path of jerseys, hats, etc. How can we customize this section for you? Thanks!

What says sports and sports culture more than dolls? I saw these dolls first on the Brooklyn Game, a Brooklyn Nets blog that I read. An excited Devin Kharpertian wrote this about the dolls:

These Brooklyn Nets matryoshka dolls, better known as nesting dolls, are… pretty much everything I’ve ever wanted in a Brooklyn Nets gift. Shout out to Russian culture? Check. A recognition by Russian doll makers that Andray Blatche and Brook Lopez succeeded together? Check. A tiny Andray Blatche? All the checks

Not every team has a Russian owner but that’s no reason to think that the sports fan in your life would appreciate these dolls any less. These dolls have a fascinating history. According to Wikipedia, the first set of matryoshka dolls was “carved in 1890 by Vasily Zvyozdochkin from a design by Sergey Malyutin, who was a folk crafts painter in the Abramtsevo estate of the Russian industrialist and patron of arts Savva Mamontov.”

The doll figures usually create a set, like cats, dogs, astronauts, politicians, etc., so the idea of creating one out of a team seems to be a natural fit. Plus they nest. Which means they are fairly compact when a social occasion calls more for white table-cloth and less for a matching set of Kansas City Royals infielders…

The dolls can be purchased on Etsy for $60 which seems to include shipping. If you don’t see your fan’s favorite team, you can order a custom set for the same price. One note of warning — not all the sets seem to have differentiated figures modeled after actual players. For instance, my Pittsburgh Penguins all look roughly like a cross between Evgeni Malkin and Donald Duck.