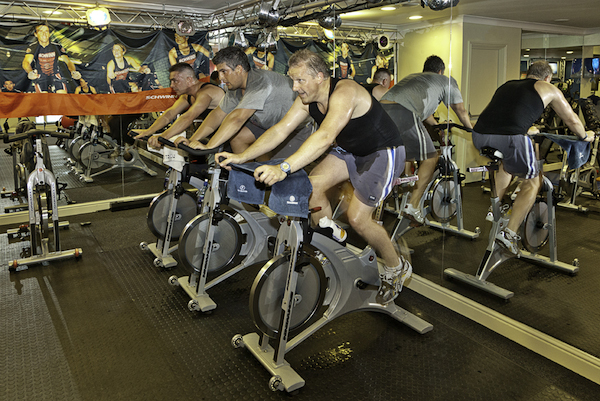 Is there a good, cheap stationary bike? Do I have to spend a ton for quality?  I just want to ride it 30 minutes a day in my basement.  I’m not trying to beat Lance or anything.

Thanks for your question! Since no one on our staff is an expert on exercise equipment we’ve decided to answer you in the form of a dialogue. After all 0 + 0 = at least a little bit more than zero, right?

Ezra: A quick Google search reveals a ton of those weird recumbent bicycles which are said to be better for you. Then again, it’s also said that the western style toilet is terrible for you over the long-run, but I don’t see to many people running out to buy holes in the floor to squat over.

Dean Russell Bell: I have great rowing machine recommendations. Now, I don’t know if you have a significant other or not and, if so, how that significant other feels about you having huge lats. But if that would be something they might be interested in, allow me to recommend the Stamina Body Trac Glider. Best thing about it: once you reach the inevitable phase when you stop exercising, it folds up so tight you can disappear it into a corner, where it won’t guilt you ever again.

Ezra: I’m not entirely sure what a lat is… but it doesn’t sound like something you’d want to have huge of. As far as exercise bikes go, the Stamina 5325 is the pick of consumersearch.com for best budget upright. It looks like… an exercise bike to me. In what might be a meaningful omission the more well respected consumerreports.org doesn’t review exercise bikes, instead focusing on elliptical machines and treadmills. There is something comforting and old-school about the exercise bike though — it feels like something you legitimately could just sit on and pedal as you watch some serious television.

Dean Russell Bell: Talking about old-school, if you really want to beat Lance Armstrong you might be better served allocating your money towards some serious EPO and blood doping equipment…

Ezra: Hold it right there Dean! We’ve already had a question about the Tour de France and we’ll be covering it in separate entries starting when the race begins on July 2. Michelle, we apologize for our total lack of useful information on this subject, but we hope we have, at least, been entertaining.

Thanks for the question, Dean Russell Bell and Ezra Fischer