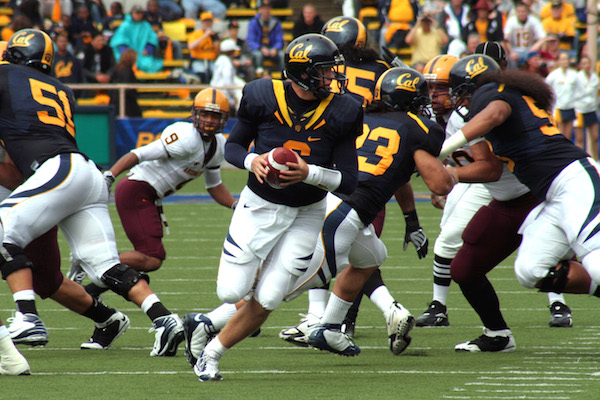 My partner is a big football fan and I’m wondering if there are any tricks to start enjoying watching football more. I want to be able to enjoy a game with him but the game seems so complicated that it’s hard to know where to start in trying to understand it.

I imagine this is a problem that many football watching newbies face. One of the sports blogs I read, Deadspin, jokingly addressed this issue the other day in a post titled, “Football is the Hardest Sport to Explain to Children and Dumb People.” In it, the author Drew Magary describes the problem and through his tongue-in-cheek impatient vulgarity, describes the reward for those who develop football understanding:

Football… almost goes out of its way to keep you at arm’s length. You can’t watch football for the first time and know, intuitively, what the hell is going on. The announcers don’t pause to explain every little thing to you, which is good because that would be really fucking annoying. But even the referees don’t know the rules to the game anymore. It can all be rather intimidating…

It takes a while to figure out what’s going on in a football game but, once you’ve got the basics down, watching becomes intensely rewarding.

Fear not though Ken, I think that I may have one little thing that you can do each play that will get you in engaged in the game and will teach you a lot about football along the way.

Once you understand the basics of down and distance (and if you don’t, I wrote a post about it a while back) the next thing to do is play the run or pass game. The rules are simple — as soon as the ball is snapped to start a play, shout out RUN or PASS. If you are watching with a friend or your partner and you are sporting people, put a small wager on each play. According to wikianswers.com there are around 125 plays in a football game. So put 10 cents on each play and you’ll end up being able to buy your friend a beer or a popcorn.

Here are three tips you can use to win the game:

2 thoughts on “How do I Begin to Enjoy Football?”