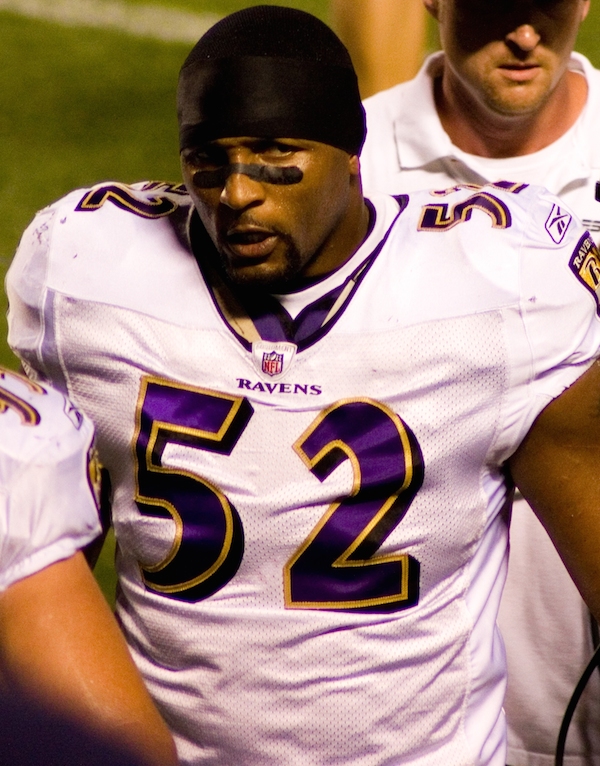 In this series, Dear Sports Fan will try to prepare non-sports fans and sports fans alike to converse knowledgeably during this Sunday’s Super Bowl parties. Super Bowl Sunday is probably the day when the most non-sports fans gather in front of televisions and mingle with their sport loving friends and family. In Part One-A of this series, we’ll cover some of the key story-lines and plot points around the game.

As is often the case with big sporting events, many fans will be following the Super Bowl for its dramatic, soap opera-esque stories. Although the game this year does not have any story half as inspiring as an athlete over-coming the twin deaths of his grandmother and girlfriend or half as bizarre as the revelation that that girlfriend never existed, this game has plenty of juicy stories orbiting it.

Ray Lewis is Everything

Ray Lewis is the starting middle linebacker of the Baltimore Ravens. He’s a very controversial figure. Some people love him, some people hate him, and some people will represent both sides of the issue while attacking the seven layer dip like a fiend. This playoff season has brought out the best, the worst, and the most dramatic elements of Lewis — let me tell you about some of it.

First, Lewis is undeniably great at his job. He’s been playing for the Baltimore Ravens since their inaugural season 17 years ago. He has been to 13 Pro Bowls, been the NFL Defensive Player of the Year twice, and was the Super Bowl Most Valuable Player in 2001 when the Ravens won last. Also… maybe he’s overrated.

We’re now done with the football side of Lewis. Before this year’s playoffs, he announced that he would be retiring at the end of the season. Boston area NESN wondered in early January (before the Ravens knocked the New England Patriots out of contention) whether or not this would inspire the Ravens to win the Super Bowl.

Lewis missed the final ten games of the regular season this year after he tore his triceps muscle. Now he’s back playing. Some say (and probably some at your super bowl party will say) that this has to be thanks to some serious performance enhancing drugs. Or even some kind of silly ones.

Lewis’ response to being asked about using deer antler spray shows another side of him — the religious crazy person side. He commented that the allegations were “the trick of the devil.” There is no question that if Lewis were not a football player, he might have been a charismatic preacher. He fires up his team before the game, cries dramatically during the national anthem, and answers post-game questions with mildly incoherent scripture.

Back in 2000, the year before Baltimore was last in the Super Bowl, Lewis was embroiled in a less goofy controversy. He was arrested for murder and aggravated assault in the stabbing death of two men outside a night club. Lewis cut a plea bargain where his charge was reduced to virtually nothing in return for testifying against his two friends. They were eventually acquitted.

Oh, and did I mention that he has a signature dance? It’s brilliant. Teach yourself it and impress your friends with an imitation. Like the mayor of Denver. Or Keenan Williams of SNL.

Good luck learning the dance! In the next two installments of this series, we’ll cover the two opposing head coaches being brothers and the complicated relationship of the host city, New Orleans, with the NFL.