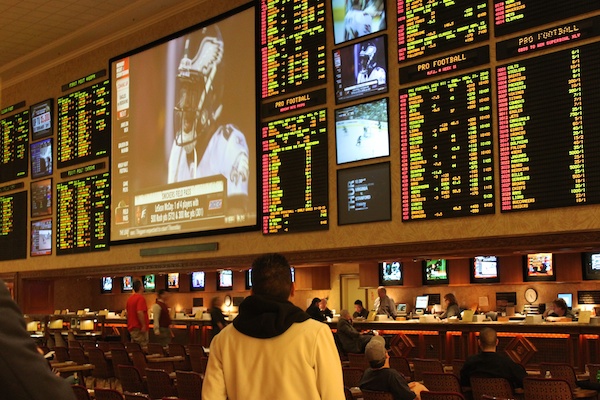 In this series, Dear Sports Fan will try to prepare non-sports fans and sports fans alike to converse knowledgeably during this Sunday’s Super Bowl parties. Super Bowl Sunday is probably the day when the most non-sports fans gather in front of televisions and mingle with their sport loving friends and family. In Part One-A and One-B of this series, we covered some of the key story-lines and plot points around the game. We also had a special post on Super Bowl party behavior written by one non-fan for others. This post will cover a few of the most common ways people gamble on the Super Bowl.

As Lisa wrote in her post on Super Bowl party behavior, Super Bowl Sunday is the day when the most people who don’t normally watch football watch a football game. Likewise it is a day when many, many people who don’t normally gamble on football have at least a few dollars riding on the game. Even if you don’t choose to gamble today, many of your friends and family will. There is likely to be almost 100 million dollars bet on the game legally in Vegas, and that’s just if you want to be legal about it. Here’s a quick explanation of the four most common types of bets that they’ll be making.

This is the most common form of football betting. You’ve probably heard someone say that a football team is “favored by three points” or is a “ten point underdog.” This is where those phrases and figures come from. A sports book in Vegas will “set a line” for a game and then bettors will gamble on either side of that line. The easiest way to think of a line is to remember that for an actual sports game, the line is ALWAYS at zero. Whichever team wins by even as little as one point wins the game. In the world of the bet, that’s not the case. The betting line is adjusted in favor of one team or the other so that in order to win the bet, you need a team to win by more than a certain number of points. We’ll get to why the line is set where it is in a few paragraphs.

This is a very common form of football line betting. When someone bets the over/under they are making a prediction about what the combined scores of the two teams will be. Basically, you need to predict whether the game will be high or low scoring. The over/under for today’s game is 48 points. If you bet on the over, you’re predicting that the combined score of the two teams will add up to more than 48; the under, less.

A quick note on lines (because the over/under is another form of line betting) and the logic of how they are set. The underlying principle of any type of gambling, is that the “house” (the entity that people bet against,) because they take a small fee on every transaction will always make money if they can balance the amount bet on both sides of a line (half on the under, half on the over; half on San Fransisco -4, half on Baltimore +4.) The house effectively pays the winners of a bet with the money they get from the losers. The only time the house can lose is if they take more winning bets than losing bets.

As you might expect, Vegas is freakishly good at balancing the bets. So, you would think that the combined score of the game is most likely to be what the line says it is, 48, but there are two things that qualify this. First — some bets are more “fun” than others — the public tends to enjoy betting an over more than an under, so the over/under will often be a little bit higher than Vegas thinks the combined scores will be. Second, well, the people who set the lines have chosen to work in Vegas. Sometimes they like to gamble a bit too.

The Super Bowl Box is the most casual form of Super Bowl betting. You’ve probably taken part in one yourself! You make a ten by ten grid, put your name in a box, and pay someone a few bucks. After all hundred boxes are filled out someone randomly assigns a number from 0 to 9 to each row and column on the chart. Each box therefore represents a pair of one digit numbers like 4 and 7. These numbers correspond to the ones digit of the score of the teams at particular moments of the game — usually at the end of each quarter. If your numbers come up, say San Fransisco 14, Baltimore 7 (or 27) at halftime, you win a bunch of money.

This is gambling at it’s most pure. Unlike the previous two forms of betting, you don’t get to make any decisions at all. When you scribble your name on a box and put in your money, you are spending 1/100 of all the money involved for a 1/100 chance to win. As soon as they assign numbers to boxes, your chances have either gone up or down as you can see from this awesome “sucky box-o-meter.”

Prop bets are another form of betting that thrives during the Super Bowl. Prop is short for proposition (as you probably know from The Wire) and these bets are all about answering questions that ask “will something happen today?” These are incredibly fun to bet on, and as you might imagine because of that, are usually difficult to win. Most of these are about the game, but a good number of them are about the spectacle surrounding the game. There are two good articles on Grantland.com about this, one by a football analyst and one by a gambling comedy writer. Here are just a few of the bets they cover:

Will there be overtime?
Will the largest lead of the game be more or less than 14 points?
Will Vonta Leach (a guy on the Ravens who almost never gets to touch the ball) score the first touchdown?
Will the opening coin toss be heads?
Will Alicia Keys’ rendition of the national anthem be longer than 2:15?

That last one is ridiculous but I’d be willing to bet that someone at your Super Bowl party has their eyes on their watch while she’s singing. Look around and let me know.

Enjoy the party and the game,
Ezra Fischer