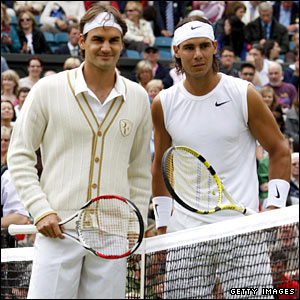 We take a brief break from Olympics previews and Super Bowl hype to talk about a tennis match that’s going to be played on Friday morning at 3:30 a.m. ET in Australia between two rapidly aging tennis players. Why is this worth breaking into our regularly scheduled programming? Because for almost 14 years, since the first time they played, Roger Federer and Rafael Nadal have been the most compelling personal rivalry in sports and there’s a chance that this could be the last time they play until they’re both on the senior exhibition tour. So grab your television remote, program your DVR for ESPN at 3:30 a.m.. Don’t make any mistake about it — delete some stuff, add an hour or two to the scheduled end time, and make sure nothing else supersedes it. Then figure out how to call out of work on Friday.

What’s so Great About their Rivalry

[Editor’s note — I wrote another post about Nadal and Federer way back in 2011. It’s still available here.]

There’s many factors that play into a rivalry. One is the consistent excellence of both players in comparison to the rest of their competition. During the heart of their careers, from 2003 to 2011, Federer or Nadal won 26 of 32 grand slam (Australian Open, French Open, Wimbledon, or the U.S. Open) tournaments. More impressive in a way is that for their careers, all but three of their losses in Grand Slam finals have been to each other. From 2005 through 2010 either Nadal or Federer was the number one tennis player in the world and the other was second.

As remarkable as those numbers are, they are augmented by the ease with which Nadal and Federer’s rivalry can be translated into narratives. Federer is almost five years older and was established as the number one tennis player in 2004. For three years beginning in 2005, Nadal sat in the number two spot. Able to surpass all his other competition but not Federer. Then in 2008, the younger Nadal finally overtook Federer. Time takes its toll on everyone, right? Not so fast — Federer battled back to be number one in 2009, only to have it stolen back by Nadal in 2010. The story would have been great if it had just been “younger great player overtakes older great player” but the back and forth, the rallies by each player that mimic the rallies within a tennis match, make it epic.

Epic too is the stylistic clash between the two players. Federer is often described as a magician. When he is at his best, he makes creative, surprising shots that no one else would think of, much less have the ability to make; and he makes them seem effortless. Nadal is his natural opposite. He’s a fierce competitor who wears his opponents down by taking their best shots and returning them faster and harder than they were hit. Federer is right handed, Nadal is left handed. Federer dresses himself like the tennis royalty he is, replete with golden insignias and elegant tennis bags. Nadal favors neon colors, sleeveless shirts, and at one point in his career, capris. Federer projects calm and control on the court. Nadal is all furious grunts and obsessive compulsive pre-serve routines.

Although it used to be common, Federer and Nadal have only played each other twice in grand slam tournaments since 2009. This Friday will be the third time in the last five years and there’s a chance it could be the last. Federer is 32 years old, which is quite old for a tennis player to be competitive. Nadal is only 27 but has been hampered by serious knee injuries in the last few years. It’s definitely a “fourth-quarter” competition towards the end of their rivalry. This only makes it more compelling to me. I love it when two players who have such history with each other play. There’s a sentimentality, a respect between the players that is rare; and a deep seeded hatred. Regardless of what they say in public, while they are still playing, these guys want to beat no one more than the other. That this might be their last significant meeting only brings the magnifying glass down a little closer. And based on the weather in Australia these days, things could get pretty hot!