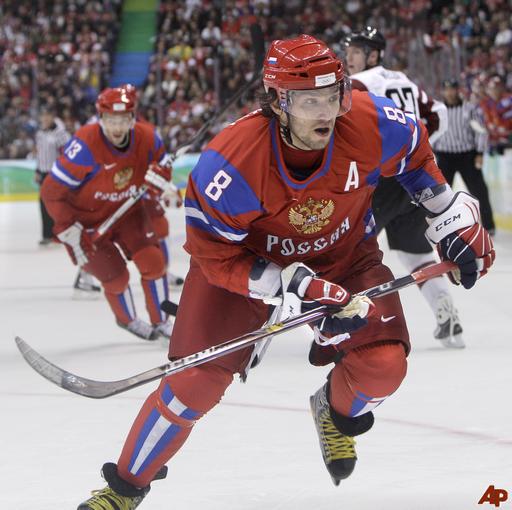 To prepare for the Winter Olympics in Sochi, Russia which begin on February 6, 2014, Dear Sports Fan is running a series of previews of Winter Olympics events. So far we’ve profiled the Luge, Skeleton, and Bobsled.

All About Ice Hockey

How Does Ice Hockey Work?

In Ice Hockey there are twelve players on the ice at a time: three forwards, two defencemen, and a goalie on each team. The goal is to shoot a small, vulcanized rubber disc into a six foot by four foot net. It’s harder than it sounds. For one thing, the goalies, who are enthusiastically padded, helmeted, and armed with a thick stick, a rectangular blocker, and a glove which resembles an oversized baseball mitt, are preternaturally quick and able to block over ninety percent of the shots that get through to them. Defenders are adept at taking the puck away from attackers or often removing the attacker from the puck by hitting them with a shoulder or a hip.
Although there are some real differences between NHL hockey and Olympic, they’re not as big as people will make them out to be. The biggest difference is the size of the rink — NHL rinks are 85 by 200 feet, Olympic rinks are 98 by 210 feet. This has the effect of favoring speed over strength and discipline over risk-taking. It makes crisp passing a better strategy than skating with the puck. Hockey in the NHL is notorious for permitting players to fight with virtually no penalty to their teams. Olympic hockey has none of this — but with rare exceptions, neither do the playoffs in the NHL.
As much as it pains me to include these, here are the highlights from the 2010 Gold medal game between Canada (victors) and the USA (losers):

What Are the Different Ice Hockey Events?

There’s a gold medal to be won by the men and the women. That’s it. No fancy events, just ice hockey. The tournament is a little complicated though. Both genders start in groups of four — three groups for men, two for women. There is a round-robin tournament and in the men’s bracket, the group winners plus the second place team with the best record advances to the quarter-finals. The other eight teams are paired off and play a single elimination game to determine the other four teams to advance to the quarter-finals. From there, it’s a single elimination tournament. On the women’s side, the four highest ranking teams start out in one group and the four lowest in the other. All four of the top ranked teams advance to the quarter-final round but the top two teams get a bye while the bottom two teams in the top group have to play the top two teams in the bottom group to qualify for the semi-finals.

It’s frankly just about the most complicated way you could possibly design a tournament for twelve or eight teams.

How Dangerous is Ice Hockey?

Surprisingly not that dangerous. Yeah, the puck is going to knock out a few people’s teeth and maybe break a jaw. Sticks can cut faces or break wrists, but compared to the catastrophic knee injuries of downhill skiing or the spectacular crashes in the sledding sports, ice hockey is relatively low risk. The fluidity of the game keeps the contact to a minimum. Concussions are the boogyman of the sport but in a short tournament like the Olympics, there aren’t likely to be too many concussion stories (partially because players and teams are likely to hide any concussions from view) unless a major player is injured.

What’s the State of Gender Equality in Olympic Ice Hockey?

This is a hard one. It’s obviously not equal — there are four more male teams than female teams — but it’s hard to blame the Olympics here. The outside ice hockey world is dominated by the all-male NHL where the most talented male players in the world can make millions of dollars honing their skills. There are a few women’s professional ice hockey leagues but not at nearly the same scale. Women’s rules differ in a couple obvious ways: they must wear full face-masks and they are not allowed to body-check their opponents. This last rule must be enforced with something of a blind-eye though. I’ve watched women’s ice hockey and it’s still pretty rough.

What are Some Fun Olympic Ice Hockey Stories?

Old to Young, Selänne to Määttä, the Olympics is a time to meet budding stars like 19 year old Finnish defenseman Olli Määttä and bid a fond farewell to legends like fellow Finn Teemu Selänne who will be playing in his sixth Olympic Games. It’s a time to re-visit players like Czech Republic forward Petr Nedved who retired from the NHL in 2007 but who, seven years later could still, according to teammate Jaromir Jagr, be the “best player on the team.”

It’s fun to see long-time NHL teammates like Sidney Crosby and Evgeni Malkin play against each other and long-time rivals like Blackhawk Patrick Kane and St. Louis Blues David Backes play with each other.