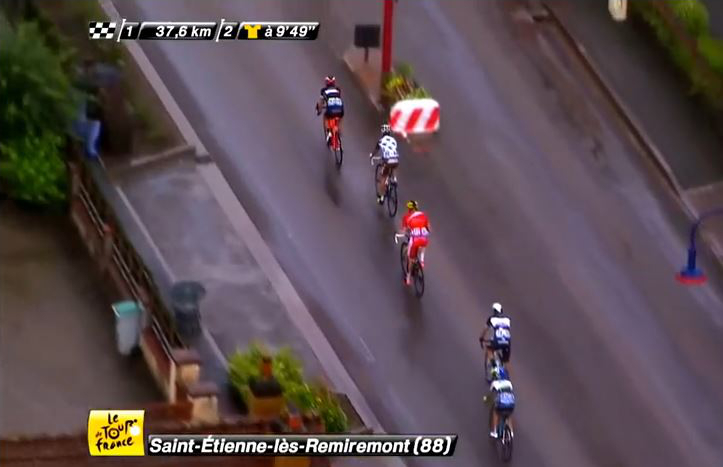 While watching LIVE broadcast from Tour de France, from time to time there is a note with the name of place, city where particular racers are. And there is always a number in brackets. And I’m wondering, what does that number mean?

Thanks so much for your question and for sending a screenshot of the TV graphic you’re asking about. I had no idea what those numbers are but this morning, I woke up and searched around on the internet for a while and I think I’ve figured it out.

The number in brackets next to the name of the town the Tour de France riders are racing through is the department of France the town is in. For example, in the image here, the riders are traveling through Saint-Etienne-les-Remiremont. Saint-Etienne-les-Remiremont is a small commune or township in France which is 70% covered by forest and has around 1,500 households in it. It sounds like a very nice place except for the periodic tragic floods it withstands due to being at the base of a water-system from a glacial lake in the mountains above it. The town was first settled in 870 by a monastery of women. Most importantly to our discussion though is that it is within the Vosges department.

A department is one of the tiered level of regional government in France: regions, departments, and communes in order of size. The history of the department is fascinating. It was created during the French Revolution and was intended to be a rational way of dividing the country. Each of the 83 (there are now 96) departments was designed so that its farthest inhabitants would still only be a day’s trip on horseback from the capital of the department and its borders were intentionally drawn across traditional boundaries to break up older political identities. The departments were named after geographic  features instead of ethnic or political ones. A pessimist would say that this was because the leaders of the French revolution had recently seen just how vulnerable a government can be if it can’t control its people but an optimist would reply back that a certain amount of central control and assimilation is necessary to establish the identity of any nation.

Of course, at this point, all we’re trying to do is enjoy watching the Tour de France on television! Today’s stage 20 will travel through the department of Dordogne [24,] so watch out for the number 24 as you go! If you want to know more about Dordogne or almost any department of France, you can go to its website which is usually www.cg[department number].fr. Dordogne’s is www.cg24.fr.

Thanks for reading and enjoy the rest of the Tour,
Ezra Fischer