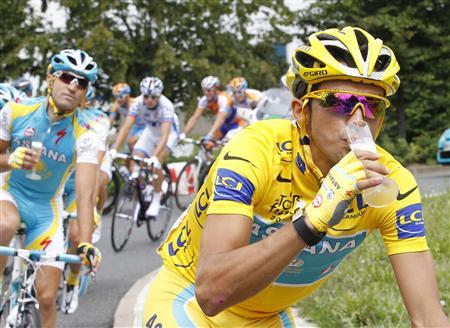 You’re absolutely right, the last stage of the Tour de France isn’t much of a race and some of the cyclists will have champagne in hand during the race. The Tour de France is a 21 stage race held over 23 days. The total distance of the course is 2,276 miles and the overall result of the Tour is the cumulative time it takes to complete all 2,276 of these miles. The primary reason why the last stage is largely ceremonial is because the standings are almost always set in stone by the time the riders get to the last day. For instance, this year, the leader, Vincenzo Nibali is 7:52 ahead of the second place rider, Jean-Christophe Peraud.

The time gaps between second and third and third and fourth are much closer — each around a minute. This leads us to the second reason why the last stage is not often the setting for any real racing: the course. The course of the last stage varies from tour to tour but it is almost always easier than a normal stage. It is flat and it ends with several loops around city streets in Paris with the finish line on the historic Champs-Élysées. On this type of course, winning the stage by more than a few seconds is almost impossible, even if the riders were to try to do so. The main way that cyclists pick up time on one another in the Tour de France is by making sprints up mountains that their competitors literally cannot force their bodies to keep up with. Cycling is a brutal sport because you usually can’t win by being more clever than your rivals and you usually can’t lose unless your body hurts so badly that it simply refuses to keep up with the winner. This isn’t to say that there are no tactics in cycling — there are — but they all involve applying pain to rivals. There’s just no way to do this on a flat stage.

The third reason why they don’t race the last stage of the Tour de France is tradition. To try to improve your overall standing in the last stage is thought to be highly uncouth and against the ethics of the sport. How can top-flight, insanely competitive athletes put up with a tradition that involves not trying? It’s perhaps not as rare as one might think, especially in situations where the chances of success are very low — where the game is basically over. This happens in American Football when the team leading the game has the ball and because of the minutiae of how the clock works, doesn’t really need to do anything to win. In this case they “kneel it out” — simulating plays by hiking the ball to the quarterback and then kneeling down. In NBA basketball, it’s common for a trailing team to intentionally foul the leading team in the last couple minutes of the game because, although they give up free throws, they stop the clock which gives them a better chance to catch up. Teams that are down by more than 10 points or so don’t normally do this, even in elimination playoff games where there is no competitive reason to give up. Nonetheless, the power of tradition, professional ethics, and social mores outweighs the competitive truth that .00001% chance of winning is better than 0%.

This doesn’t mean that the last stage of the Tour de France is a bore. It’s not. The last ten or fifteen minutes of the race are fascinating and exciting! While the overall standings won’t change, it is extremely prestigious to win the last stage of the tour. Teams with sprinting specialists who have survived the mountains of the tour will be desperately trying to set them up to win the last stage. The way a team can help a sprinter is by racing really, really fast (but not as fast as he can go) in front of him until the very last moment when he bursts out from behind his teammates and powers himself up to almost 50 mph. As a consequence of all these teams attempting to lead their sprinters out at precisely the right moment, the peloton (large group of cyclists) looks like this massive, lunatic monster that is trying to burst out of its own skin. It’s a sight to behold.