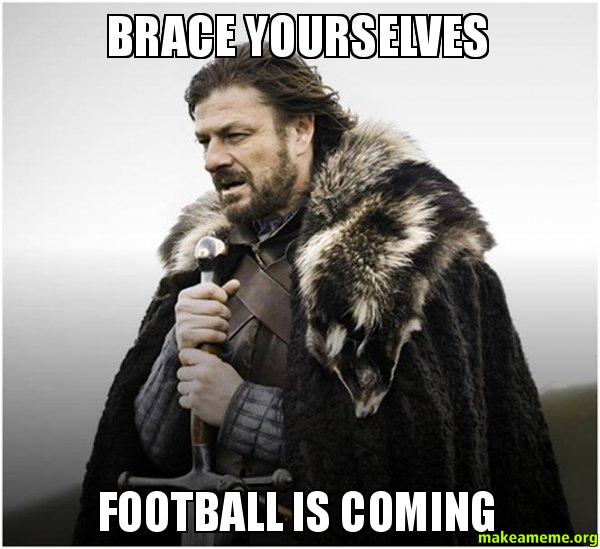 Football is coming. As inevitable as winter in George R. R. Martin’s Game of Thrones series, college and NFL football is rapidly approaching and when it does, it’s going to wipe every other topic in sports off the landscape. Already it’s beginning to dominate. The first two stories of my favorite show in the genre of sports guys yelling at each other, Pardon the Interruption, were about NFL football. Four of ESPN’s top eleven stories right now are about football. At si.com it’s seven of fifteen. Fantasy football preview magazines fill the newsstands as passionate owners begin their preparation for the upcoming season. If you don’t believe me, there’s even a website, howmanydaystillfootball.com that just lists how many days till football there are. Football is coming.

Football is coming and I have mixed feelings about it. I love football. It’s not a sport I grew up with but it’s become one of my favorite to watch. I once answered a friend who asked, “Why Do People Like Football?” and I listed a bunch of reasons. Among them were the fascinating tactics, the obscure technicalities that are so much fun to argue about, the crazy athleticism of its players, and even the violence. I also listed “fantasy football” and “sitting on the couch” in the list. Here’s what I had to say about them:

It’s these two factors that I feel the most divided about. It’s not that I don’t love playing fantasy. I do. I’m even messing around with my own idea of an innovative new fantasy game, but more on that another time. And you know I like sitting on the couch. I’m doing it right now! It’s just that I don’t love the extent of the power football has over me. I enjoy watching other sports. The recent World Cup was so much fun and it didn’t dominate my life the way the NFL can. I enjoy reading and seeing friends and family outside of the context of sports. I’ve been enjoying listening to non-sports podcasts on my commute, like This American Life, Risk!, and Ask Me Another. I like traveling on weekends without fighting off the urge (or giving in, more likely) to compulsively check my phone. Most of all, I like having my brain free from thinking about how to win at fantasy football so it can think about what moves to make next in my career or how to be a good friend, partner, brother, son, and grandson.

So this year, when football swarms over the landscape like the zombie populated winter storm in Game of Thrones, I’m going to weather it more gracefully than before. Maybe I’ll plan a few weekends of travel now so I lock myself into not watching every weekend. Maybe I’ll do a better job picking and choosing only the games I think are legitimately interesting each week to watch. Maybe I’ll go out more to watch with friends instead of hiding in my living room. Football is coming and I can’t wait, I just want to find a way to savor it without letting it sabotage me.