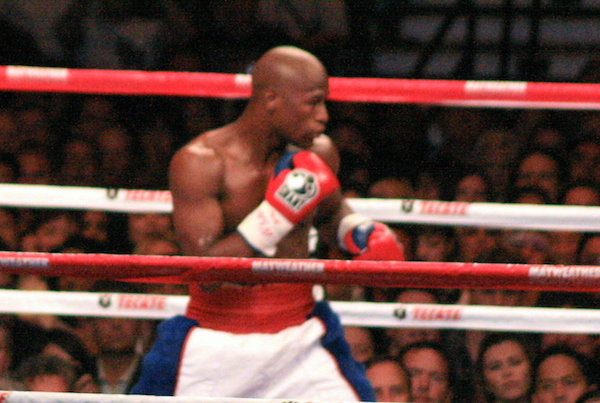 Mere hours before the most highly anticipated boxing match of the decade, a scandal erupted. Two prominent journalists from ESPN and CNN have had their press credentials, those magical passes which grant them access not just to the arena but to the fighters themselves to ask questions before and after the fight unexpectedly revoked. Fellow journalists around the world and internet have rallied to their defense. #boycotthefight began trending on Twitter. What’s the fuss about? The short answer is that the two journalists in question are women and the fighter who is being blamed for pulling their credentials is a well known abuser of women. The long answer? Well, about that long answer…

As with many situations in life, it’s helpful to tell one of my father’s jokes.

A person from a big city is visiting some friends of theirs who live in a tiny town. She gets in at night and enjoys a few hours of sitting by the fire and drinking beer while letting her friends regale her with all the scandalous goings on of their small town. She learns about the Smith’s strange sexual proclivities, the Borden’s habit of sleep driving, that Dan Trent is cheating on his wife with his dental hygienist, and many many more stories. In the morning, the big city visitor awakes, refreshed after a good sleep. She walks down to the breakfast table where her hosts are already eating. They’re laughing at something in the local paper. The visitor asks what it is. She’s told that the local gossip columnist has printed a story outing Dan Trent as being a cheater. The visitor says, “but that’s not news, you told me everyone in town already knew about that. Why do they bother printing it and what’s so funny about reading something you already know?” Her friend wipes the tears from his eyes and says, “Yes dear, we already know everything, but we still like to know who got caught!”

Classic Dad joke. Not funny, per se, but useful nonetheless. The problem with the presently erupting scandal is that we already knew that Floyd Mayweather was a misogynist, egotist with a long history of abusing women. Why should it matter now that he “gets caught.”  That’s all this is — it’s society “catching” someone for something we already knew about. On one hand, this is good. The more abusers we collectively shame, even if we can’t lock them up, the better. On the other hand, manufacturing outrage now feels hypocritical — as if revoking press passes were some how worse than abuse.

For background on Mayweather, please read some or all of these articles, they are both wonderful writing and much needed journalism. Thanks to those who wrote them.

The Boxer and the Batterer

by Louisa Thomas for Grantland

If you only read one thing about Floyd Mayweather or this fight or boxing in general or just anything at all this weekend, this should be your choice. Thomas writes a completely engaging, objective, and most of all, true story about the contradiction of a man whose boxing success has been built by controlling his rage within the ring, who expresses his rage freely on the faces and bodies of women in his life.

On Saturday, Mayweather will take on Manny Pacquiao in a fight that has quickly become the biggest, most important event in recent boxing history. What’s so striking to me isn’t the spectacle of it but the dissonance around it. A sport that is increasingly marginal is dominating SportsCenter. A fight in a stadium that holds only 16,800 and is available only on pay-per-view could generate $300 million. A boxer who wins like a dancer allegedly beats women like a pugilist.

What are you supposed to do with this?

This Is How Las Vegas Protects Floyd Mayweather

by Diana Moskovitz for Deadspin

A long, exhaustive, and brilliant investigative attempt to counteract Mayweather’s refrain that if he had really abused women, there would be pictures of it.

There are pictures, though. In at least two cases of domestic violence, official records show pictures were taken. In one case, a police report explicitly says that the photos show a victim’s injuries. But authorities in Las Vegas, a city poised to make millions off Floyd this weekend, have either destroyed the photos or haven’t released them.

This is perhaps the cruelest part of the victims Mayweather chooses. They’re mostly women who have emotional relationships with him, sometimes even children with him. They still care for him, despite the bruises, concussions, and death threats, because domestic violence is a cycle of power and control that is difficult to escape. Like many domestic abusers, Mayweather wins them back with apologies, lavish gifts, and promises he’ll never do it again—taking advantage of his power and control over them—and then hits them again.

The same feelings that make it so hard to break out of an abusive relationship make it hard to release the surest proof that Mayweather beats women. It’s easy to throw everything you have at a stranger on the street who slugs you in the face. It’s not easy to do the same with the father of your children.

by Daniel Roberts for Deadspin

The best article (at this time) about today’s scandal.

Stop and process this for a moment. Showtime has denied press credentials to two of the most prominent reporters for three of the world’s most important television outlets, including HBO, which is co-producing the fight, and ESPN, which has invested huge chunks of its prime schedule this week promoting the fight in infomercial-like fashion.

While it is Mayweather’s team that is pulling the strings, it’s Showtime that owes the world an explanation. Why have they continued to sanitize their coverage of Mayweather’s history of domestic violence while continuing to unhesitatingly promote other aspects of his outside-the-ring lifestyle? Why did they allow Mayweather to air a one-sided self-produced infomerical in which he denied any responsibility for his convictions? Why are they blackballing important female journalists for having the temerity to question Mayweather about what everyone else seems to recognize is a legitimate topic…