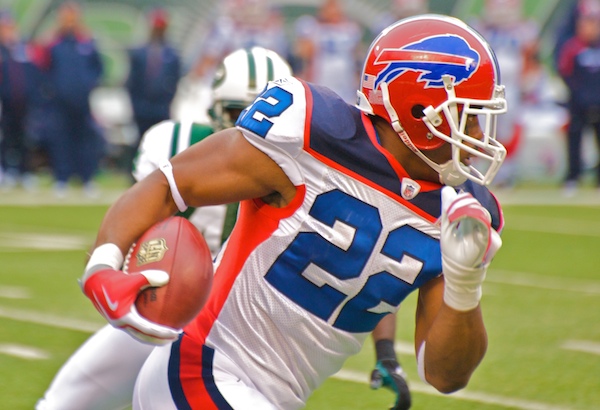 The Bills have an epic history and an uncertain future. Starting with the 1990 season, the Bills won their conference and went to the Super Bowl in four straight years. They are the only NFL team to ever have accomplished this amazing feat of sustained achievement. They lost all four Super Bowls. What an incomprehensible blow to the players, coaches, and fans, who were involved with all four of those Super Bowls! I mean… what are the chances, right? In the more recent past, the Bills have struggled mightily. They haven’t made the playoffs since 1999 — the longest playoff drought in the NFL — and they’ve only had a winning record twice in that time. They’ve also experienced the indignity of playing one of their “home games” in Toronto over the course of several years while rumors of relocation swirled. Throughout all of this, they’ve retained a small but totally devoted fan base. As the only major professional sports team in Buffalo, the Bills are the only show in town.

Who are some notable players or figures from the Buffalo Bills?

Jim Kelly was the quarterback for those Bills teams that went to and lost four straight Super Bowls. Kelly is beloved by Buffalo fans, despite things starting off on the wrong foot between him and the city. Kelly, not a fan of cold weather, chose to play in the USFL for two seasons instead of for the Bills, who drafted him in 1983. It wasn’t until the USFL folded that Kelly signed a contract to play with the Bills. His personal life has been full of challenges. His son, Hunter, was born with a fatal degenerative disease and died in 2005. Kelly was diagnosed with a rare form of cancer in 2013 but is said to be clear now after surgery and rounds of chemotherapy and radiation. Buffalo fans identify with people who face such challenges, and the fact that Kelly has chose to remain in a town near Buffalo throughout all of it, counts heavily in his favor.

Ralph Wilson was the founding owner of the Buffalo Bills in 1959 and owned the team for more than fifty years until his death in 2014. He is credited with helping to keep the AFL and some of its teams alive, having actually lent money to the Oakland Raiders and New England Patriots. During his time in the NFL, Wilson was an active owner, often pushing the league in the direction he thought best. He was one of two owners who lobbied then commissioner Pete Rozelle to postpone games following the JFK assassination. Rozelle went ahead with the games and later said it was his biggest regret. In his later years, Wilson was seen as a strong and stubborn idealistic owner. He refused to sell the naming rights to his stadium and was determined to keep the Bills in Buffalo despite its small market size.

Where do the Buffalo Bills play?

Imagine you’re about to go on a blind date and all you know about the person is that he or she is a Buffalo Bills fan. Here’s what you can guess about that person. Remember that all fans are unique. We bear no responsibility for any misunderstandings we engender. Trust but verify.

Looking for a faithful mate? Someone who will stick with you through thick and thin? Don’t look any farther than the Bills fan opposite you. They survived four consecutive Super Bowl losses and still love their team. It’s hard to even imagine what that would be in dating terms, but don’t sweat the little stuff, like spilling your drink on them, giving that cute waiter the eye, forgetting your wallet, and then needing to head home early to prepare for tomorrow’s crochet competition.

What will make a Buffalo Bills fan squirm?

You could try using the phrase, “wide right” to refer to the most heartbreaking of the Bills four Super Bowl losses. Honestly though, most Bills fans have probably gotten over that by now. A better and more contemporary way of making them squirm would be simply to assume the continued dominance of the New England Patriots.

Team colors are royal blue, red, and white. Their current uniforms look like this.

A post about the 2015 Buffalo Bills including an overview of their most interesting characters as well as what fans expect from the team this year.