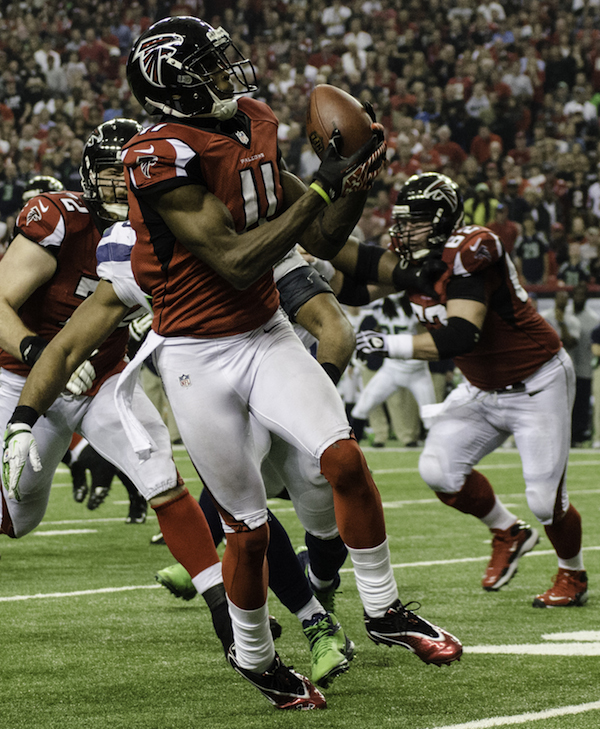 One of the thirteen teams to never win a Super Bowl, the Atlanta Falcons cannot lay claim to being the most successful team. They’ve only fielded winning teams 14 out of their 49 years of existence, and only once (2008-2012) were they able to put together any kind of sustained run of winning. This once-in-a-while characteristic seems to also be true about creating a distinct team identity. The Falcons are capable of doing that, but only once in a while, and only in an impermanent sense. It doesn’t seem like the 1998 “Dirty Birds” identity has much to do with the identity of the team during its years with quarterback Michael Vick or in its years since then. Falcons eras come quickly and before you look, they’re gone.

Who are some notable players or figures from the Atlanta Falcons?

Michael Vick played quarterback for the Atlanta Falcons from 2001 to 2006. Drafted first overall by the Falcons, fans have never had higher hopes for the team than when Vick was at the helm. He was the extreme example of a running quarterback. Insanely fast, freakishly elusive, and with a great ability, learned over many years of playing, to know exactly when to take off and run down the field, Vick was the most exciting player in the league during his years with the Falcons. Although the team did have some success in that time, they were never as successful as they were exciting. Vick’s time with the Falcons came to a scandalous end in 2006 when he was arrested, convicted, and eventually incarcerated for his role in a dog-fighting ring. After serving his time, Vick was able to return to playing in the NFL but not with the Falcons.

Deion Sanders, nicknamed “Prime Time” is another example of an amazing athlete who started his career on the Falcons. Drafted fifth overall by the team in the 1989 draft, Sanders’ primary position was cornerback but also played as a kick and punt returner and in isolated situations on offense. He also played baseball professionally for the MLB team in the city, the Atlanta Braves. A good sign of his virtuosity on the football field is the breakdown of his scoring with the Falcons. He scored ten touchdowns in his five seasons in Atlanta, three on interception or fumble returns, five on kick or punt returns, and two by catching passes on offense. Sanders was elected to the Hall of Fame in 2011.

Where do the Atlanta Falcons play?

Imagine you’re about to go on a blind date and all you know about the person is that he or she is a Atlanta Falcons fan. Here’s what you can guess about that person. Remember that all fans are unique. We bear no responsibility for any misunderstandings we engender. Trust but verify.

They’re either from the Atlanta area or they LOVE Michael Vick and probably played a lot of Madden NFL video games. Or still do. Vick was basically unstoppable in those games when he was on the Falcons, so much so that many people had house rules against playing with the Falcons. I was once in an airport and saw a man go up to Vick and say, “Hey man, I love you in Madden.”

What will make a Atlanta Falcons fan squirm?

You might think it would be saying something about dog-fighting but I think most Falcons fans have moved on from that. No, I would go more towards suggesting their team is boring. It’s not true but it’s just close enough to being true to make a Falcons fan sweat.

Team colors are red, black, white, and silver. Their current uniforms look like this.

A post about the 2015 Atlanta Falcons including an overview of their most interesting characters as well as what fans expect from the team this year.