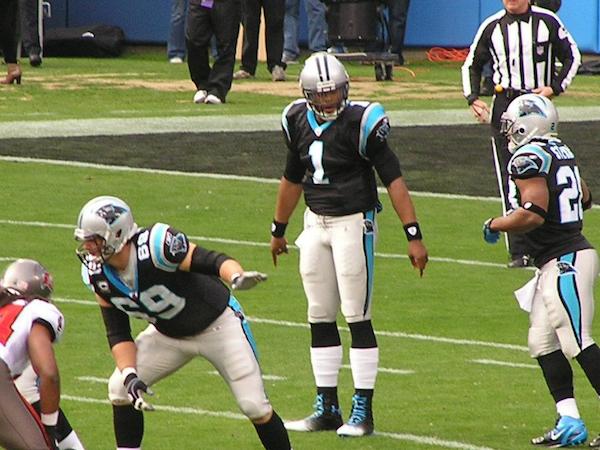 One of the newest teams in the NFL, the Falcons are an interesting example of NFL expansion that mimics that of the National Hockey League in some ways. North Carolina, where the team plays its home games, is one of the few places in the country where football is still not the top sport in the market. College basketball and the epic rivalry between Duke and North Carolina has always and seems like it will always be at the top of the sports pyramid. The Panthers balancing act can be seen in its choice of color. “Panther Blue” is a shade of blue precisely at the midpoint between the dark blue that Duke wears and UNC’s powder blue. The Panthers live in a divided world — split between North and South Carolina, split between Duke and UNC. Even their tailgating tradition involves areas that focus on all different types of food.

Who are some notable players or figures from the Carolina Panthers?

Jerry Richardson is the only owner the Panthers have ever had. He’s a true home-grown success story. Born and raised in North Carolina, Richardson played college football at Wofford in South Carolina. After his college days, he was drafted by the then Baltimore Colts and played two years in the NFL. He used money earned from his football career to open the first Hardee’s restaurant franchise. From there he moved up in the restaurant business, eventually becoming CEO of Flagstar, the sixth largest food service business in the world. Football was always his first love though and he worked tirelessly to bring a professional team to the Carolinas.

Steve Smith is small for a wide receiver but he’s an enormous part of Panthers history. Drafted in 2001, Smith played for 13 seasons with the Panthers and holds basically every receiving record on the team. Smith played (he still plays but now for the Baltimore Ravens) with a ferocity and determination rare, even in the ultra aggressive world of the NFL. At 5’9″, it never seemed like it was possible for Smith to make the type of physical, leaping, battling aerial catches that were his specialty, but he found a way. In 2005 he was the league leader in all three major categories for a wide receiver: catches, yards, and touchdowns. Smith was not only team captain but also the emotional heart of the Panthers team for most of his time in Carolina.

Where do the Carolina Panthers play?

Imagine you’re about to go on a blind date and all you know about the person is that he or she is a Carolina Panthers fan. Here’s what you can guess about that person. Remember that all fans are unique. We bear no responsibility for any misunderstandings we engender. Trust but verify.

Sitting across from a Carolina Panthers fan, you can be sure that they have room in their heart for more than just one object of affection. Rare among professional football fans these days, most Carolina Panthers fans have a sport and a team that comes before football and their NFL team: either Duke or the University of North Carolina in men’s college basketball.

What will make a Carolina Panthers fan squirm?

Figure out if they are a Duke fan or a UNC fan and then claim that the Panthers swing in the direction of their rivals.

Team colors are Panther Blue, black, silver, and white. Their current uniforms look like this.

A post about the 2015 Carolina Panthers including an overview of their most interesting characters as well as what fans expect from the team this year.