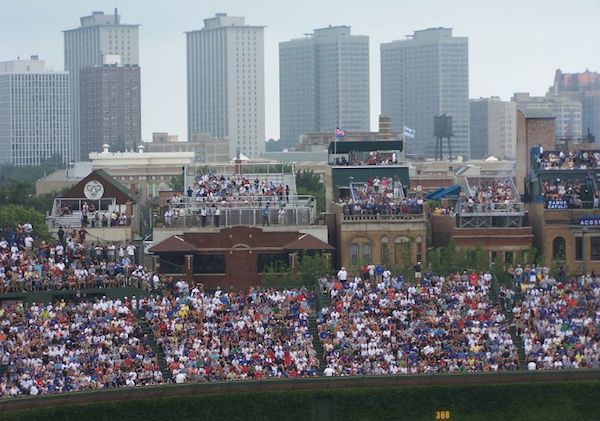 Who owns the rooftop seating near Wrigley Field? My partner and I were watching the playoffs last night and the television cameras were focusing on some bleachers set up on a building across the street from the stadium. We wondered if that was officially part of the stadium or not.

Those seats are cool, aren’t they? Wrigley Field is one of Major League Baseball’s last two great old historic baseball stadiums. It was built in 1914 for a baseball team called the (I kid you not) Chicago Whales, but the present tenants, the Chicago Cubs, have played there since 1916. As was true with many of the old stadiums, it’s built inside the city, instead of in a suburb with lots of room for parking like most modern stadiums. One result of this is that the stadium is surrounded by relatively normal city streets with buildings on them that are around the same height, at least on the two outfield sides. As you noticed last night, many of these neighboring houses now sport bleacher seating on their roofs, from which you can watch the game. You can actually see them on Google Maps:

The Wrigley Rooftops, as they are called, have their own Wikipedia page, which I leaned heavily on for this article. How they got there and who owns them is a surprisingly long and twisted story.

For most of Wrigley Field’s history, the neighboring rooftops were home to informal gatherings. Watching the games from them was a perk neighbors enjoyed, perhaps as a consolation for the literally hundreds of thousands of drunk people the stadium brought to their neighborhood every year. Sometime in the 1980s, some of the people who owned the buildings started bulking up their seating arrangements and charging admission. This escalated gradually to where we are today: most of the buildings are no longer residential. Their primary purpose is to support the bleachers on their roofs. Some of them even have bars and restaurants inside. They provide a stadium-like experience at stadium-like prices.

As you might suspect, the people who own the Chicago Cubs have not always been happy about the idea of others profiting off of their investment so directly and in such a similar way to how they are trying to make a profit. In 2002, the Cubs sued the owners of the Wrigley Rooftops for copyright infringement. I guess the idea was that rooftop viewers were engaged in an act analogous to pirating a TV feed. Most of the rooftop establishments eventually settled out of court and agreed to pay the Cubs 17% of their proceeds as a form of royalty. The Cubs agreed to officially endorse those roofs. That led to a detente which lasted almost a decade until the current owner of the Cubs, Thomas S. Ricketts, who had purchased the team in 2009 after the settlements, decided to renovate those sides of the stadium in ways which would obstruct the rooftop views. All hell broke loose. In a classic turn of legalistic fate, the owners of the rooftops sued the Cubs! Their argument was that the Cubs were now breaching the contract they entered into during the settlement of the last lawsuit.

Despite this antagonistic and adversarial relationship, (or maybe because of it), the era of the independent rooftop may soon be over. Frustrated with the lawsuit filed by the rooftop owners, the Cubs have decided that it would be easier and cheaper in the long-run to simply buy the neighboring buildings with their rooftop clubs. To date, Ricketts has purchased at least six of the buildings, a process made easier by the fact that some of them seemed to be in financial straits to begin with. How long the other rooftops will be able to hold out remains to be seen.

That’s the story of the unique Wrigley Rooftops. It’s a classic American story of lawsuit and counter-suit that fits America’s Pastime perfectly.