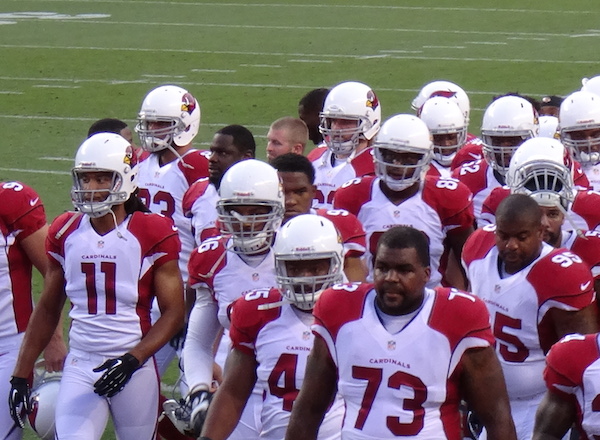 The Arizona Cardinals host the Green Bay Packers in the second of the four 2016 National Football League (NFL) Divisional playoff games. This game is on Saturday, January 16, 2016 at 8:15 p.m. ET on NBC.

The Green Bay Packers were generally thought of as the least likely of the four Wild Card teams last weekend to win on the road. They may have been, but they still traveled to Washington and won their game convincingly. The spark from their offense that had been missing for the last three quarters of the season was back. Quarterback Aaron Rodgers looked happy and everything was rosy in Green Bay. Now, less than a week later, they are back on the road facing a rested and daunting Arizona Cardinals team. The Cardinals have been a potentially great team for the past few years but each year their potential is stolen from them by dint of an injury to quarterback Carson Palmer. There are lots of great players on the Cardinals (their depth is impressive) but only one is irreplaceable. This year, Palmer is finally healthy for the playoffs and it will be a thrill to see how far this team can get… as long as he stays healthy.

Who are the main characters on the Green Bay Packers?

Aaron Rodgers – I wrote last week about the mystery of Aaron Rodgers. Generally thought of as the best quarterback alive, he had been having a terrible season. True, he was missing (and will be until next year) his best wide receiver, but that shouldn’t be enough to totally thwart such a great player. Whatever accounted for Rodgers’ malaise, he shook it off and played an amazing game. He’ll need to be even better this week for the Packers to have a shot against the Cardinals.

Mike McCarthy – Mike McCarthy has been the coach of the Green Bay Packers for the last ten years. That’s a long time in football terms and it’s also Aaron Rodgers’ entire career. Despite having won a Super Bowl in 2010 and returned to the playoffs every year since then, McCarthy is not thought of as a great coach. My guess is that this is due to a combination of Rodgers getting the bulk of the credit and McCarthy making too many obvious time-management blunders at the end of games. Last week’s victory over Washington quieted some of McCarthy’s critics.

The offensive line – A few weeks ago, when these two teams played in the regular season, the Cardinals blew the Packers out and a big reason for that was the Packers offensive line. In that game, two of their best linemen were out injured. The team should get at least one and perhaps both of them back for this one and they hope the results will be different. As is often said about quarterbacks, you should be able to get a good sense of how well the game is going to go for the Packers by how many times the line lets Aaron Rodgers get hit. As a reminder, this is the line that made news last year for playing Settlers of Catan.

Who are the main characters on the Arizona Cardinals?

Bruce Arians – Head Coach Bruce Arians is almost always the biggest character in the room. He’s an iconoclast who wears his weirdness literally on his head. He’s famous for wearing kangol hats. When it comes to football, he’s ready to try just about anything that might work but he has some clear preferences. On offense, he wants to throw the ball farther down the field more often than any other coach in the league. This high-risk, high-reward strategy asks a lot of the team’s quarterbacks and offensive linemen, which has been a problem in the last two years.

Carson Palmer – The guy throwing the ball down the field for Arians is Carson Palmer. Palmer has had one of the most long-lasting tragic careers in sports. Early in his career, he was seen as being on track to be one of the truly great quarterbacks of his generation. Then, on the first throw of his first playoff game, he completed a beautiful, long pass to receiver Chris Henry (who has since died, so this is a doubly tragic play in retrospect,) and was hit low by an opposing linemen and tore his ACL. The injury was not a career ending injury (clearly) but it altered his path significantly. He’s now seen as a very good player whose greatness was robbed from him, not once, but several times thanks to other injuries. At 36, this isn’t his last shot to reclaim that greatness, but it may be his best shot. It’s hard not to root for Palmer.

Larry Fitzgerald / John Brown / Michael Floyd / Jaron Brown / J.J. Nelson – This is the best set of five wide receivers that any NFL team has ever had. Other teams (including the Pittsburgh Steelers this year) might have had a better top three, but I don’t think any team was as good and as deep as the Cardinals. Larry Fitzgerald (who remains the best football player I’ve ever seen in person. I had the unfortunate pleasure of watching him go for 207 yards and 2 touchdowns in the first half against Rutgers in 2003.) is the old man of the bunch. A sensational player who has transitioned into being the world’s best possession receiver, capable of picking up 8 yards whenever his team needs him to. The other four are different varieties of deep threat — insanely fast dudes who are good at running past their defenders and catching the ball. If they start getting it going, just watch and marvel at them.

I don’t think this game is going to be particularly close. Yahoo’s football blog ran an article about this game headlined, “No on expects another blow out when Packers meet Cardinals.” I do. The Cardinals should be able to start scoring and never look back. The Packers might be able to score some but not nearly enough. Cardinals will win by a bunch.