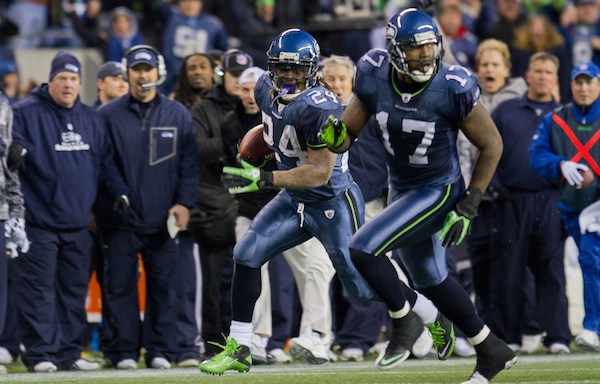 The Carolina Panthers host the Seattle Seahawks in the third of the four 2016 National Football League (NFL) Divisional playoff games. This game is on Sunday, January 17, 2016 at 1 p.m. ET on Fox.

As I’ve been watching football games this weekend, I’ve seen a bunch of commercials for the Batman v. Superman movie. It seems to pit two super heroes against each other. That’s kind of the plot of this game as well. The Seattle Seahawks have made the last two Super Bowls, won one, and came a few seconds away from winning the other. They are physical, intimidating, and resilient. The Panthers are equally worthy of being characterized as a super hero. They almost got through the season undefeated, losing just once, late in the season. Their offense is driven by a quarterback whose trademark celebration has him acting like Superman, and based on the way he plays, it’s not that much of a stretch. Their defense is just about as good as the Seahawks’ ever was, even when they were at their peak two years ago. As a wild card team coming into the playoffs on a hot streak, the Seahawks are the team no one wanted to play. The Panthers are probably the one team that doesn’t care who they play — they think they can beat everyone.

Who are the main characters on the Seattle Seahawks?

Russell Wilson – After three years in the NFL, quarterback Russell Wilson had led his team to the playoffs in all three years and to the Super Bowl twice, winning once. That’s a heck of a record for any quarterback, especially one who was thought to be too small to be successful in the NFL. Despite that amazing start, it wasn’t until this season, his fourth in the league, that you started hearing people talk about Wilson as one of the best quarterbacks in the league. With injuries hampering the team’s running offense, it started to rely more heavily on Wilson and he did not disappoint. It’s largely through his amazing improvisation and accurate passing that the Seahawks are back in the playoffs for the fourth straight year.

Marshawn Lynch – Running back Marshawn Lynch, known as Beast Mode for his brutally physical running style, has missed the last month and a half after having surgery on a sports hernia. A sports hernia is a significant tear in the abdominal wall and muscles and the surgery to repair it is pretty major. After missing the team’s first playoff game last weekend, Lynch plans on being back for this game, but it’s an open question of how close to his normal self he’ll be able to be.

K.J. Wright/Bobby Wagner/Bruce Irving – Over the past few years, the Seahawks have been known for the strength of their defense. More specifically, they’ve been known for their strong secondary (nicknamed the Legion of Boom) and their aggressive pass rushing defensive line. In this game however, because the strengths of their opponent (I wrote this last week about Teddy Bridgewater and the Vikings, but it’s even more true about the Panthers) are a strong running attack and a mobile quarterback, the most important part of the Seahawks defense may be their linebackers. In K.J. Wright, Bobby Wagner, and Bruce Irving, the Seahawks have three strong veteran linebackers. The outcome of this game is most likely to hinge on their success or failure.

Who are the main characters on the Carolina Panthers?

Cam Newton – Quarterback Cam Newton is, and always has been a lightning rod for controversy. In college, he won a national championship with Auburn, and it was an even more open secret than with most high profile college players that he had taken fairly large sums of money under the table for playing there. In the NFL, he’s been the subject of years of criticism for being too self-impressed, too brash, both criticisms that have suspiciously racial overtones. From a strictly football standpoint, he’s been an amazing success. He’s a combination of one of the top ten pure passers in the league with a top ten running back in a single body. Newton ran for over 600 yards and 10 touchdowns this season. This makes him an unusual double-threat for opposing defenses to fret about, especially when the Panthers get close to the goal line.

Josh Norman – If you had surveyed a group of football fans a year ago today about who corner back Josh Norman was, you would probably have gotten a lot of blank stares. Now, after the season he had this year, he’s a household name. Norman is one of the rarest commodities in football, a shutdown corner. He will line up opposite a team’s best wide receiver and basically erase him from the game. Quarterbacks have learned that throwing to a player guarded by Norman is close to a no-win situation and it can be a giant loss if Norman gets his hands on the ball.

Luke Kuechly – Middle linebacker, Luke Kuechly is literally at the center of the Panthers defense and he’s figuratively its heart. He’ll be wearing the green dot on his helmet which signifies that he is the only defensive player who gets the play calls radioed in from the coach and it’s his job to communicate them out to the rest of his teammates. Experiment for a few plays and just watch him — he wears number 59 — and marvel at how quickly he figures out what the offense is going to do and gets himself into a position to help stop them from doing it.

Of all the playoff games so far, this is the one I’m having the most difficulty in predicting. Who wins when Batman meets Superman? It’s just hard to imagine either of these teams losing. When in doubt though, I’m always inclined to go with old-age and treachery to win out over youth and vigor. Both of these teams are (obviously) made up of young, vigorous people, but making it to the Super Bowl two times in a row has to count for something. I’m guessing the Seahawks winning muscle memory gets them through this game victoriously.