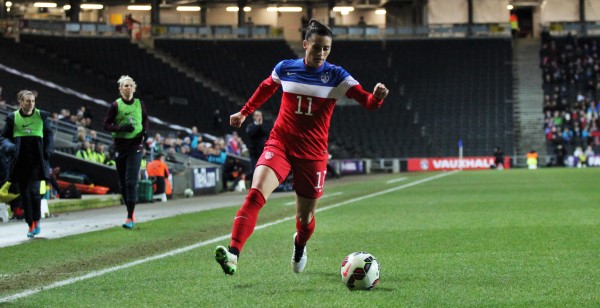 National team experience: Krieger just played her 100th game for her country, this will be her third World Cup, she has 1 goals. Krieger was not even on the team’s roster during the 2019 She Believes Cup.

What I wrote in 2015: At 30 years old and going into her second World Cup, Ali Krieger should be a constant veteran presence on the back line for the United States… If all goes well, Krieger will play every minute of this World Cup, holding down the right side of the U.S. defense with confident, consistent play. She’s not quite as offense minded as her counterpart over on the left side of the field, Meghan Klingenberg, but that’s okay, the team has plenty of offensive weapons.

What to expect from Ali Krieger in 2019:  It’s been a weird four years for Ali Krieger. After playing an invaluable part on defense during the 2015 World Cup, and through no apparent fault of her own, she’s barely played at all for the national team. The only reason anyone seems to be able to produce for this is a tactical one. Coach Jill Ellis has spent the past four years embarking on an experiment to see if she can play essentially attacking players in the left and right defense positions and Krieger is a defensive right fullback. If that’s the case, then Krieger’s inclusion on the team can be read as a sign that the experiment has failed, or at least that Ellis feels shaky enough about it that she wants to have a more traditional defensive option on the team in case things go wrong at the World Cup. Krieger is that “break glass in case of emergency” option. Although she’s silky smooth with the ball, her best attributes are defensive positioning and tackling.

Non-gendered personal interest item:  Krieger recently annoucned her engagement to USWNT goalie, Ashlyn Harris. Yes, this is kind of gendered in a way, but on the other hand, it’s pretty big news to have an out engaged couple on the USWNT. Here’s the always great Cyd Ziegler’s news story on the topic on his website Outsports.

Links: In addition to Deadspin and Forbes obsessing exploring Krieger’s inclusion on the team, here are her Wikipedia page, U.S. Soccer page, and Twitter.