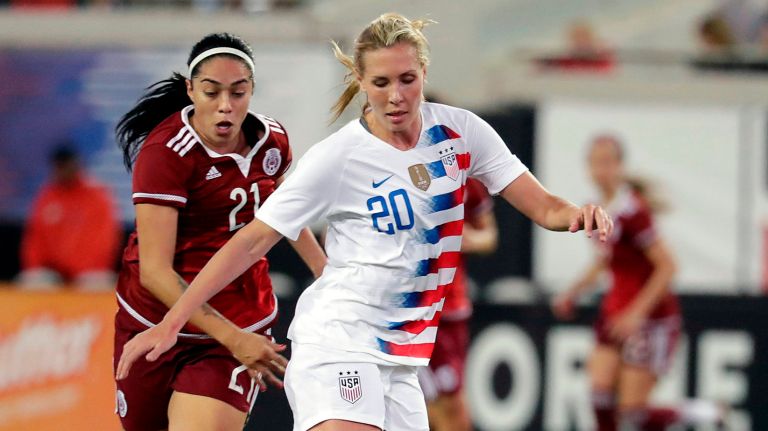 National team experience: 45 appearances, this will be her first World Cup, she has six goals. During the 2019 SheBelieves Cup, Long wasn’t on the team, but she came on as a sub in each of the last two friendly matches before the World Cup.

What to expect from Allie Long in 2019:  Allie Long is one of those classic bitter sweet USWNT stories. A star player in college and for her club teams, Long has always been just slightly below the best players on the U.S. team at her natural position. For Long, that position is central attacking midfield, a position that Carli Lloyd and Lauren Holliday had a lock on for a solid six years. Now that Holliday has retired and Lloyd is at the end of her fine career, Long finds herself again behind two players at that position, this time younger than herself: Lindsay Horan and Rose Lavelle. Blocked at her natural position, like so many others, Long has had to show positional flexibility to make the team. Coach Jill Ellis has experimented with moving Long straight back into either center back or central defensive midfield. Since Long is a wonderful player, strong, physical, excellent in the air, a technically sound passer, she did just fine in those positions… but not well enough to supplant players who have been playing the for longer and have a more naturally defensive mindset. So now she finds herself blocked for playing time behind Becky Sauerbrunn, Abby Dahlkemper, and Julie Ertz instead of Lindsay Horan and Rose Lavelle. No matter what, the outcome is the same. She’s unlikely to see much playing time in France. If she does get into a few games, expect to see her playing in one of the more defensive positions.

Non-gendered personal interest item: During the off season, Long plays futsal. Futsal is a version of soccer played either indoor or outdoor on asphalt with smaller teams and a smaller, heavier ball. It emphasizes ball skills and quick feet. In the United States, it’s played mostly by Hispanic soccer players.

Links: Here are her Wikipedia page, U.S. Soccer page, and Twitter as well as two profiles by empireofsoccer.com and ABC News.