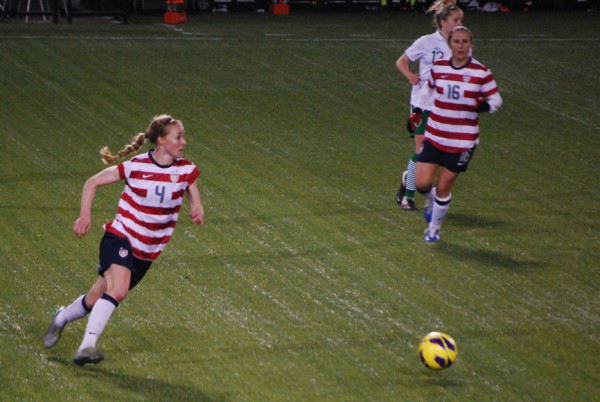 National team experience: 157 appearances, this will be her third World Cup. She has zero goals (as one would expect). During the 2019 SheBelieves Cup, Sauerbrunn was getting over a knee injury. She missed the first game, player part of the second, and all of the third. This is not typical.

What I wrote in 2015: Becky Sauerbrunn is a prototypical central defender. She’s strong, physical, and totally reliable. If you’re a midfielder, you feel secure knowing that if you make a mistake, Sauerbrunn is right behind you to clean it up. If you’re a goalie, you know you can count on her to keep the front of your net clear… Sauerbrunn has become the leader of the back line… Barring a major injury, we should expect to see Sauerbrunn on the field for every minute of the World Cup.

What to expect from Becky Sauerbrunn in 2019:  Uh… honestly, nothing has changed from four years ago. Becky Sauerbrunn is still the prototypical central defender. The biggest difference this year is the context Sauerbrunn is playing in. Not only have opponents improved but the U.S. team has spent much of the last four years experimenting with playing converted attackers on either side of the defensive line. Sauerbrunn is being asked to do more than ever at the heart of the team’s defense while her wing backs go shooting up the field. If she can solidify the back line the way she did during the 2015 World Cup, that will go a long way to repeating as champions. .

Non-gendered personal interest item:  As the wonderful soccer writer, Stephanie Y explains, everyone wants Becky Sauerbrunn to score a goal. There was even a plot among her teammates to give her a penalty kick, but Sauerbrunn classically refused. If she gets a national team goal, she wants to earn it. Hard to imagine there will be many opportunities for the most defensive of defenders to score in the World Cup, but as Stephanie writes in her article, “it would be dope.”

Links: A Equalizer Soccer profile of Sauerbrunn plus her Wikipedia page, U.S. Soccer page, and Twitter.