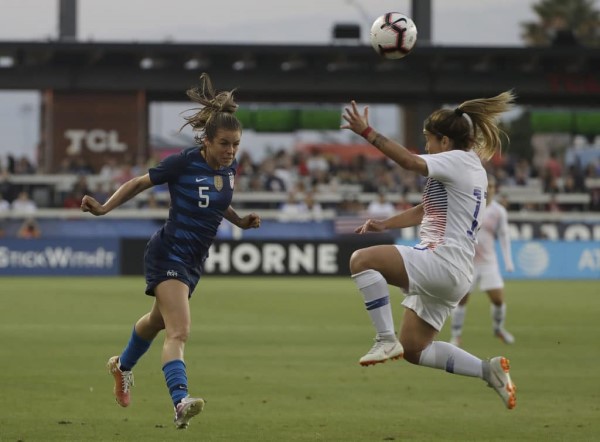 National team experience: O’Hara has played 118 games for the national team and scored two goals. During the 2019 SheBelieves Cup, when she was recovering from injuries, she started each game and was subbed for mid way through.

What I wrote in 2015: All [O’Hara’s] versatility is impressive, but I wonder if it has done her a disservice. It’s hard to be the best at any one thing when you’re asked to do so many different things. Coming into this year’s World Cup, O’Hara has been unable to grab a starting position in any position. She’s played as a wing-defensive sub and also as a reserve midfielder. It’s comforting to have such a versatile substitute on the bench, ready to step in wherever she’s needed, but you have to ask yourself what could have been if she had been able to play one position for her whole career.

What to expect from Kelley O’Hara in 2019:  I was lucky enough to snag a ticket to the World Cup semifinals back in 2015 between the United States and Germany. Having watched both women’s and men’s teams lose to Germany in World Cups before, my heart was in my mouth from a few hours before the game until the final whistle. So, I’ll never forget watching O’Hara score from right midfield just a few minutes after she came in as a sub in the second half. After the game, I heard about how coach Jill Ellis decided to put O’Hara in (in discussion with an assistant coach, she said “You know, we need a bitch. Get Kelley.”) In the context of sports, outside of super stars, it’s hard to imagine a higher compliment. What Ellis meant was that O’Hara would rise to the occasion, makes her opponents’ lives miserable, and finds ways to get even greater performance out of her teammates. Although O’Hara is a veteran of two World Cups, her career arc is still trending up. A perfect fit for Ellis’ plan of having versitile two-way players at outside defense, O’Hara is assumed, despite struggling with an ankle injury this spring, to be the starting right fullback. If her body cooperates, you should expect to see O’Hara dominating the right side of the field, flying up in overlapping runs on offense and racing back on defense when needed. She’s a tough tackler. She can run around you or, if she decides to, run over you.

Non-gendered personal interest item: Don’t misspell O’Hara’s last name. It has an apostrophe! That’s hard for some pieces of technology, including custom jersey software. Earlier this year, O’Hara responded on Twitter to a fan who was trying to customize a jersey from Fanatics.com but could’t get the apostrophe in O’Hara! I believe it’s now been fixed.

Links: Articles about O’Hara from goal.com and ESPN plus her Wikipedia page, U.S. Soccer page, and Twitter.